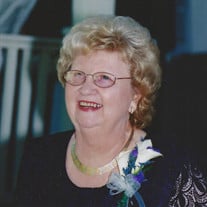 Our mother, Kay, was a positive influence not only on our immediate family, but also her extended family, down to spouses of nephews and friends of her grandchildren. Several told us she was the best mom and grandmother they had ever known. We agree. By their example, she and Tom showed us the importance of always being there for your family and friends. Kay preached through the way she lived her life. She managed 58 rental units for many years out of our home. Ours was the only house in Waynesville that sometimes sported a CLOSED sign. It was amazing how many people would knock on the door to ask if the No Vacancy sign was correct. After we all left home, she managed Lynch Brothers Furniture in Rolla for 20+ years. She served as a Cub Scout den mother and a Girl Scout leader. Kay was not into crafts, but weekly she planned activities for her young charges. These meetings often left glitter or wood shavings all over our family room. She was also a member of the Alter and Rosary Society. Kay moved to Waynesville in second grade. She became fast friends with the girls on North Street and they remained close friends throughout their lives. Even this week, Kay texted with Bertie Egan from the hospital. Kay loved baseball and was a faithful Cardinal fan. She attended all the games at the American Legion baseball field that her father had built behind the old high school. Between innings she sold concessions. Kay graduated from Waynesville High School as salutatorian in 1952 and married Thomas Lynch four weeks later, one day before Tom’s 21st birthday. Kay and Tom were married for 64 years and 9 months. They attended every school event of their children and grandchildren. They traveled to every graduation and wedding of nieces, nephews, and cousins. Together they traveled to Rome, France, Hong Kong, and Mexico. Our family hosted an exchange student from Turkey for the 1974-1975 school year. Years later, Ertugurl hosted Tom and Kay for an extensive personal tour of Turkey. They square-danced for a few years. Once great-grandchildren began to arrive, youth sports games, school programs, and county livestock fairs filled their calendar. Kay is survived by her husband, Tom Lynch, and the three of us and our spouses: Joe and Hannah Lynch of Springfield, Missouri; Ann and John Jarrett of Waynesville; and Ken and Sharon Lynch of Kingdom City, Missouri. Their six grandchildren provided the best gifts to Kay: great-grandchildren. Each year, new pictures go up over Kay and Tom’s television to chronical their growth. Suzanne and Brian Boyd and their children, Benjamin and Abigail Hruska, Lorlei and Gwyndol Boyd, live in Milwaukee, Wisconsin; Rebekah and Jesse Teller and their children, Rayph and Tobin, live in Springfield, Missouri; Joanna and Matthew Frederick and their children Lillian and Sam, live in Ballston Spa, New York; Jessicca and Marcus Moore and their children, Jonas and Elaina, live in Petaluma, California; Clinton and Lisa Jarrett and their children, Tyler and Blake, live in Waynesville; Sean and Michelle Lynch and their children, Audrey, Kaden, and Kendrick, live in Waynesville. Kay also has eight first cousins and many nieces and nephews living around the country. Kay was a blessing to all who knew her and she will be sorely missed, especially by us. Kay was preceded in death by her parents, Ottber “Pete” and Lavena Prewitt of Waynesville, and her brother, the Honorable James K. Prewitt of Springfield. Mass of Christian Burial was held at 2:00 p.m. Monday, March 20, 2017 in the St. Robert Bellarmine Catholic Church with Father John Groner officiating. Evelyn Horine provided the music and serving as escorts were Clinton Jarrett, Sean Lynch, Charlie Davis, Norman Anderson, Jesse Teller and David Thomas. Serving as honorary escorts were Victor Lynch, Brian Boyd, Mathew Frederick, Gordon Davis, Jerry Thomas and Steve Lynch. Burial followed in the Resurrection Cemetery of St. Robert, Missouri. Services were under the direction of Memorial Chapels and Crematory of Waynesville / St. Robert. Memorial contributions may be made in memory of Kay Lynch to Janet’s Wish or to the Pulaski County Fair Board Livestock Pavilion. Online condolences can be sent at www.memorialchapelsandcrematory.com.

Our mother, Kay, was a positive influence not only on our immediate family, but also her extended family, down to spouses of nephews and friends of her grandchildren. Several told us she was the best mom and grandmother they had ever known.... View Obituary & Service Information

The family of Karalene "Kay" Lynch created this Life Tributes page to make it easy to share your memories.

Our mother, Kay, was a positive influence not only on our immediate...