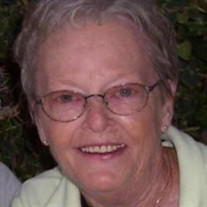 Karen Jeanette Allen was born April 6, 1939, in Ferndale, Michigan to Lloyd E. Flynn and Ardith E. (Logan) Flynn. The family lived in Cameron, Illinois when Karen was younger, and in Vermont, Illinois, attending school in Fulton County. While living in Illinois, Karen met and married James Edward Allen August 2, 1958. Karen and James had two children Lloyd and Beth. They lived in Galesburg, Illinois for a few years and then moved to Cameron, Illinois where they raised their children until 1987, when Karen and James decided to move into the small community of Richland, Missouri to be near their son who was serving in the military. Karen was a devoted wife and mother. She enjoyed taking care of her home and family, and briefly worked building fiberglass boats, in home health care, and babysitting. Her hobbies included playing bingo at the American Legion, crocheting, playing the guitar, singing, watching soaps and Animal Planet, and traveling to Germany, Italy, and the Netherlands. She was preceded in death by her parents, her beloved husband, James Edward (3/26/2001); one sister, Norma Munson, and one brother, Clifton Flynn. On Sunday, March 7, 2021, Karen passed away at her home after a short battle with cancer, in Richland, having attained the age of 81. She leaves behind to cherish her memory, one son: Lloyd E. Allen (Alicia) of Richland, MO, one daughter: Beth Ann Allen (Loren Schieffer) of Phoenix, AZ; four grandchildren: Dustin Allen (Abby), and Lucas Allen all of Wellston, OK, Memphis Allen and Savannah Blackburn both of Richland, MO; two great-grandchildren: Noah and Emery Allen; nieces, nephews, and a host of other family and friends. Karen loved and enjoyed her family. She lived life to the fullest and her legacy will live on through those she loved. Private family services were held Friday, March 12, 2021. Burial followed in the Oaklawn Cemetery of Richland, MO. Services were under the care of Memorial Chapel of Richland. Memorial contributions to the Waynesville Animal Shelter or to Rescue One (Springfield, MO) in memory of Karen Jeanette (Flynn) Allen may be made directly to those organizations or may be left at the funeral home. Online condolences can be sent at www.memorialchapelsandcrematory.com.

The family of Karen Jeanette (Flynn) Allen created this Life Tributes page to make it easy to share your memories.