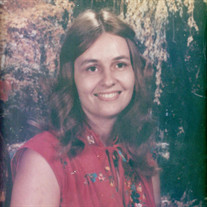 Katherine “Kathy” RuthAnn Graves, daughter of the late Chester P. and Donna Ann (Plummer) Zollman, was born May 31, 1952 in Tully, Pennsylvania. She went home to be with her Lord Thursday, September 10, 2015 in the Mercy Hospital of Springfield, Missouri having attained the age of 63 years. Due to her father being in the United States Army, Kathy and the family moved wherever the Army sent them. She eventually came to the Fort Leonard Wood area and on June 27, 1970, she was united in marriage to Lloyd Daniel “Danny” Graves. They shared over 45 years of marriage together and four children: Nancy, Danny II, Elizabeth and Carrie Jo. Kathy was a hardworking woman. She worked as a retailer in the shoe business and also as a caregiver with a day care and nursing home. Her most important work was taking care of her family, which she enjoyed doing immensely. In her spare time, Kathy enjoyed working outdoors in her garden and flower beds. She also liked to do different craft projects. Most importantly, she loved spending time with her family and friends, especially her grandchildren which she was especially proud of. At an early age, Kathy had made a profession of faith and was baptized. She had served for many years as a pastor’s wife, most recently at Idumea Baptist Church of Laquey and attended church every time she was able until her health began to decline. Kathy will be sadly missed but fondly remembered by all those that knew and loved her. She leaves to cherish her memory, her husband: Danny Graves of the home; four children: Nancy Graves-Ezell (Gerald) of Maumelle, AR; Danny Graves II (Shelly) of Laquey, MO, Elizabeth Ann Schwartz of Laquey, MO and Carrie Jo Graves of St. Robert, MO; brothers and sisters: John Zollman (Lana) of Waynesville, MO, Jean Wallace of Praque, OK, Stacy York (Paul) of Union, MO, Mike Zollman of Crossett, AR, Carla White of Ashville, NC, Diane Zollman of Springfield, MO, Johnna Bordeaux of St. Paul NC, Sherry Whitehead, Grace Salata of Buffalo, MO, Norma McPhillips of Windyville, MO, Harvey Phinney, Richard Phinney, Michael Phinney and Johnny Phinney; seven grandchildren: Karl Huber, Danielle Graves, Gabrielle Ezell, Kayla Ezell, Danny Graves III, Smoke Ezell and Amir Joseph; numerous nieces, nephews, other relatives and friends. In addition to her parents, Kathy was preceded in death by one brother, David and stillborn twin granddaughters: Holly and Chantel. Funeral services were held at 11:00 a.m. Saturday, September 19, 2015 in the Memorial Chapels and Crematory of Waynesville / St. Robert with Bro. Gary Humphrey officiating. Kathy’s husband, Pastor Danny Graves, expressed his thankfulness for all the thoughts and prayers of everyone during his family’s loss and recalled his wonderful memories of Kathy. Becky Lercher sang “Serenaded By Angels”, and the songs “In the Garden” and “Amazing Grace” by Kathy’s favorite artist, Elvis Presley, were played. Memorial contributions may be made in memory of Kathy Graves to the Idumea Baptist Church or the American Cancer Society and may be left at the funeral home.

Katherine &#8220;Kathy&#8221; RuthAnn Graves, daughter of the late Chester P. and Donna Ann (Plummer) Zollman, was born May 31, 1952 in Tully, Pennsylvania. She went home to be with her Lord Thursday, September 10, 2015 in the Mercy Hospital... View Obituary & Service Information

The family of Katherine "Kathy" RuthAnn Graves created this Life Tributes page to make it easy to share your memories.