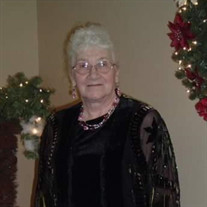 Kathleen LaVerne Cross, daughter of Charles William Oliffe Jack and Agnes Coletta Schelkle, was born March 27, 1937. At an early age, Kathleen was adopted by Russell William Schelkle. As a young girl, Kathleen grew up in Medina, Ohio and graduated from Medina High School. Shortly after graduation, Kathleen entered the United States Air Force and served her country faithfully until her honorable discharge. Kathleen went on to hold positions with Walmart for many years and concluded as an entrepreneur owning a frozen yogurt shop (Frosty’s Frozen Yogurt) and J&L Repair doing fiberglass tub repair. In her earlier years, she worked as a bookkeeper for several service companies and held a 2nd night job to help make ends meet. Kathleen was united in marriage to Ronald Rhodenizer for several years before he preceded her in death. She later married Joseph Cross who preceded her in death on May 17, 1995. Kathleen was an adventurous woman and she loved to travel, especially with her special companion, Richard Werner. There was not a place within the United States that she did not visit. National Parks and Las Vegas were her favorites along with historical sites. Kathleen moved to Arizona and after moving she was extremely active in the parks where she lived. She managed the entertainment, bands, and activities as well as booking tours for the residents. This was part of what made her the happiest later in life…making people around her happy. The only club she belonged to, was the “Fun Club”. Her passion was helping people enjoy themselves. Kathleen passed away Monday, May 10, 2021 in the Windsor Estates of Camdenton, Missouri having attained the age of 84 years. She will be sadly missed, but fondly remembered by all those that knew and loved her. Kathleen leaves to cherish her memory, her six children: Russ Rhodenizer (Brandy) of Camdenton, MO, James Rhodenizer of Portland, OR, Michele Snyder of Lebanon, MO, William Rhodenizer of Conway, MO, John Rhodenizer (Belinda) of LaGrange, GA, and Rhonda Cristoffer of Lebanon, MO; special companion: Richard Werner of Apache Junction, AZ; six siblings: Robert Schelkle (Betty), Charles Jack, Jean Jack Croteau, Lloyd Jack, Rodney Jack, and Robert Jack; nieces and nephews: Bradley Schelkle (Lorrie), Debbie Schelkle, and Tabitha Kelly (John); several grandchildren, great grandchildren, and cousins across the United States and United Kingdom. In addition to her two husbands, Kathleen was preceded in death by her father: Charles William Oliffe Jack; parents: Agnes and Russell Schelkle; three siblings: Richard Schelkle (Linda), Frances Robson (James), and Kenneth Jack; one niece: Noelle Schelkle; one nephew: Christopher Schelkle; and three children: Renee Kieckbusch (Bud), Lil’ James Rhodenizer, and Elizabeth Clark. Funeral services will be held at 2:00 p.m. Tuesday, May 18, 2021 in the Memorial Chapels and Crematory of Waynesville / St. Robert. Burial will follow in the Sunset Memorial Estates Cemetery of Waynesville. Visitation will be held from 1:00 p.m. until time of service at 2:00 p.m. Tuesday, May 18, 2021 in the Memorial Chapels and Crematory of Waynesville / St. Robert. Memorial contributions may be made in memory of Kathleen Cross and may be left at Memorial Chapels and Crematory of Waynesville / St. Robert.

The family of Kathleen LaVerne Cross created this Life Tributes page to make it easy to share your memories.