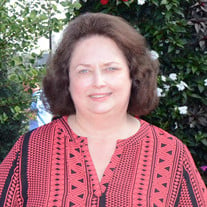 Kathleen Delores Hoffman, daughter of the late Ralph Emory and Kathleen Delores (Taylor) Brown, was born May 19, 1955 in Mobile, Alabama where she grew up and attended school there. On December 7, 1979, Delores, as she was known to her family and friends, was united in marriage to Steven Frederick Hoffman in Anniston, Alabama. They were blessed with three daughters: Julie, Jeannie and Stephanie. Delores and the family lived in Alabama for 20 years before moving in 1999 to Fort Leonard Wood where they have resided since. While living in Alabama, Delores ran a daycare center and loved caring for the children. In her earlier years, she was a manager of McDonald’s and worked at Burger King on Fort Leonard Wood for a couple of years after coming to Missouri. In her spare time, Delores loved to decorate, sew and was an amazing cook. She was a very giving and loving person and enjoyed giving her baked goods away to friends and family. Delores passed away Wednesday, February 10, 2016 in St. Robert, Missouri having attained the age of 60 years. She will be sadly missed, but fondly remembered by all those that knew and loved her. Delores is survived by her husband: Steven Hoffman of Waynesville, MO; and three daughters: Julie Christine Kerr (Richard), Jeannie Lynette Jones (Joey) and Stephanie Amanda Hoffman (Zachary Klein); 6 grandchildren: Justin, Savannah, Lorelei, Andrew, Brooke and Joseph; three sisters: Brenda O'Dell (Tom) of Saraland, AL, Johnnie Ennis (Neal) of Arab, AL and Linda Dean (Steven) of Mobile, AL; four brothers: Ralph Brown, Jr. (Babs) of Mobile, AL, Marvin Brown (Kathi) of Mobile, AL, William Brown (Cheryl) of Spanish Fort, AL and James Brown of Mobile, AL; six brothers and sisters-in-laws: Daniel Hoffman and James Hoffman, both of Madison, WI, Michael and Barbara Hoffman of Madison, WI and Robert and Kris Hoffman of Prescott, AZ; fourteen nieces and nephews; and many friends whose lives were forever touched. Services were held at 11:00 a.m. Saturday, February 20, 2016 in the Memorial Chapels and Crematory of Waynesville with Father John Groner officiating. The songs “On Eagle’s Wings” and “Amazing Grace” were played. Memorial contributions may be made in memory of Delores Hoffman to the organization of the donor’s choice and may be left at the funeral home.

Kathleen Delores Hoffman, daughter of the late Ralph Emory and Kathleen Delores (Taylor) Brown, was born May 19, 1955 in Mobile, Alabama where she grew up and attended school there. On December 7, 1979, Delores, as she was known to her... View Obituary & Service Information

The family of Kathleen Delores Hoffman created this Life Tributes page to make it easy to share your memories.

Kathleen Delores Hoffman, daughter of the late Ralph Emory and...