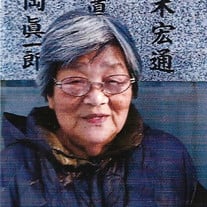 Kay Hinze, daughter of the late Shinichiro Sugie and Kie Saito Sugie, was born July 16, 1927 in Sapporo, Hokkaido, Japan where she grew up and attended school. On May 24, 1951, Kay was united in marriage to a United States Army soldier, William Louis Hinze in Sapporo, Japan. They shared over 50 years of marriage together before he preceded her in death on December 15, 2002. Kay and William were blessed with four children: Marie, Karen, William and Linda. In 1951, shortly after their marriage, Kay came to the United States and became a citizen in 1953. Due to William being in the military, Kay and the family moved several times, with Fort Leonard Wood being his final duty station. Upon his retirement, they made their home in Crocker. In 1965 she began working for Fort Leonard Wood Billeting. She retired in 1998 after 33 years of faithful service. In her spare time, Kay enjoyed working with her hands; whether it was sewing, knitting, crocheting or painting. She loved to share her beautiful work with family and friends. Kay also enjoyed attending bingo where she spent almost as much time visiting with people as she did playing her cards. Most importantly, she loved to travel and treasured spending time with her family. Kay passed away May 13, 2014 in her daughter’s home in Aurora, Colorado having attained the age of 86 years. Kay leaves to cherish her memory, her four children: Marie Von Haas (Herbert) of Aurora, CO, Karen Mackney (Earl) of Richland, MO, William Hinze of Crocker, MO and Linda Hinze (Tony) of Crocker, MO; three siblings: Kiichiro Sugie, Ikuko Onodera and Reiko Mikami, all of Japan; nine grandchildren; seven great grandchildren; nieces, nephews, other relatives and friends. In addition to her parents and husband, Kay was preceded in death by three sisters: Atsuko Sugie, Yuko Endo and Kazuko Ogawa. Services were held at 7:00 p.m., Wednesday, June 4, 2014 in the Memorial Chapels and Crematory of Waynesville / St. Robert. In lieu of flowers, the family suggests memorial contributions be made in memory of Kay Hinze to the local Disabled American Veterans Chapter 49 and may be left at the funeral home.

Kay Hinze, daughter of the late Shinichiro Sugie and Kie Saito Sugie, was born July 16, 1927 in Sapporo, Hokkaido, Japan where she grew up and attended school. On May 24, 1951, Kay was united in marriage to a United States Army soldier,... View Obituary & Service Information

The family of Kay Hinze created this Life Tributes page to make it easy to share your memories.