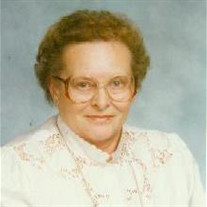 Kaya Gossett, daughter of the late Frances Xaver and Walburga (Antl) Rösle, was born May 3, 1928 in Prague, Czechoslovakia. Kaya grew up in Friedberg, Germany and attended school there. Kaya met and married Robert Major, a soldier in the United States Army. They married in 1955, and to this union were born two children: Donald and Jerry. The young family was transferred to Fort Leonard Wood, Missouri in 1960, after which two more children were born: Kenneth and Debra. This marriage was later dissolved. On November 26, 1969, Kaya was united in marriage to Delinous Gossett in Fort Wainwright, Alaska. They shared over 35 years of marriage together before Delinous passed away in 2004. Kaya worked at the Non Commissioned Officer’s Club on Fort Leonard Wood for 17 years, after which she enjoyed staying home and working as a housewife and mother. In her spare time, she enjoyed being outdoors while working in her vegetable and flower gardens, watching and feeding birds, or going fishing. She was a member of the E-9 Wives’ Club and enjoyed visiting with all the other wives. She loved her family and looked forward to spending time with them. Kaya passed away Sunday, June 11, 2017 having attained the age of 89 years. She will be sadly missed, but fondly remembered by all those that knew and loved her. Kaya leaves to cherish her memory, her four children: Donald Major and his wife Cindy of Dixon, MO, Jerry Major and his wife Linda of Virginia Beach, VA, Kenneth Major of Las Vegas, NV and Debra Johns and her husband Ray of Dixon, MO; eleven grandchildren; seventeen great grandchildren; other relatives and friends. In addition to her parents and husband, Kaya was preceded in death by one grandson, David Smith. Services were held at 10:00 a.m. Friday, June 16, 2017 in the Memorial Chapels and Crematory of Waynesville / St. Robert with Deacon Rick Vise officiating. The songs “Amazing Grace” and “On Eagle’s Wings” were played. Serving as escorts were the Donald Major, Jerry Major, Kenneth Major, James Lawson, Kenny Major, Jr., and Ray Johns. Burial followed in the Resurrection Cemetery of St. Robert, Missouri. Memorial contributions may be made in memory of Kaya Gossett to the St. Jude’s Children’s Hospital and may be left at the funeral home.

Kaya Gossett, daughter of the late Frances Xaver and Walburga (Antl) Rösle, was born May 3, 1928 in Prague, Czechoslovakia. Kaya grew up in Friedberg, Germany and attended school there. Kaya met and married Robert Major, a soldier in... View Obituary & Service Information

The family of Kaya Gossett created this Life Tributes page to make it easy to share your memories.

Kaya Gossett, daughter of the late Frances Xaver and Walburga...