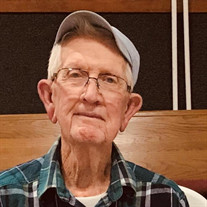 Kenneth F. Ruhl, son of the late Fredrick Augusta Ruhl and Lucy Wilma (Farris) Ruhl, was born February 21, 1928 in Waynesville, Missouri where he grew up and attended school. During World War II, Kenneth was drafted into the United States Army and he served his country faithfully until his honorable discharge in 1947. Kenneth worked in several different industries over his lifetime. He worked as a laborer in construction, drove a truck in the St. Louis area, worked for Civil Service at Fort Leonard Wood and also worked at Playcraft Pontoon Boat Factory in Richland until his retirement. He retired in 1991 to take care of his mother until her passing. In his spare time, Kenneth enjoyed watching old westerns and comedies on television. In his younger years, you would find him out fishing or setting trout lines and just enjoying the river. Kenneth passed away Thursday, November 12, 2020, in the Lebanon North Nursing & Rehab having attained the age of 92 years. He will be sadly missed, but fondly remembered by all those that knew and loved him. He is survived by his sister, Jude Willhoff of Colorado Springs, CO; and a niece, Sheila Ruhl of Vienna, MO; nephew: Randy Ruhl of Dixon, MO; sister-in-law: Joyce Ruhl of Dixon, MO; as well as a host of other relatives and friends. In addition to his parents, Kenneth was preceded in death by three brothers: Paul Eugene Ruhl, Lloyd Vernon Ruhl, and infant brother James Carol Ruhl. ervices were held at 1:00 p.m. Thursday, November 19, 2020 in the Memorial Chapels and Crematory of Waynesville / St. Robert with Pastor David Hokanson officiating. The songs “Amazing Grace” and “I’ll Fly Away” were played. Serving as escorts were Randy Ruhl, Rob Willhoff, Leonard McKinnon, Alvin Lane, Darrell York, and Dub Turnbow. Burial with military honors followed in the Gospel Ridge Cemetery of St. Robert, Missouri. Military honors were provided by the Missouri Honors Team. Memorial Contributions in memory of Kenneth Rhul may be left at the funeral home.

Kenneth F. Ruhl, son of the late Fredrick Augusta Ruhl and Lucy Wilma (Farris) Ruhl, was born February 21, 1928 in Waynesville, Missouri where he grew up and attended school. During World War II, Kenneth was drafted into the United States... View Obituary & Service Information

The family of Kenneth Fred Ruhl created this Life Tributes page to make it easy to share your memories.