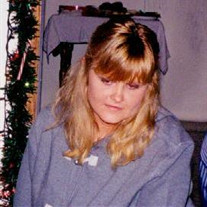 Kimberly Rae (Wilson) Moore, daughter of David & Johnna Wilson of the St. Robert area, passed away peacefully at her home in Wenztville, MO on April 02, 2017 with her family at her bedside. She had attained the age of 46 years, 4 months and 1 day. She was the oldest of 2 daughters. Kimberly was born in Lamar, Missouri and then lived in the South Greenfield area until the age of 3. She began the 1st grade in Brush, Colorado. The family eventually returned to the family farm in near South Greenfield where they lived until January of 1985. During this time she attended school in the Greenfield school system. Her dad returned to military service that same year and Kim then continued her schooling at Ft. Bliss, Texas, Mannheim, West Germany and upon returning to the States she returned to the family home in Waynesville, Missouri and graduated from Waynesville High School. She went on to attend Columbia College and earned her Bachelor’s degree in Sociology finishing 1st in her class. In the fall following her graduation she elected to join the U.S. Air Force where she served honorably in Italy and a short period in Oklahoma where her son David was born on August 26, 1994. When her enlistment was up she and her son returned to the Waynesville area where she met Sgt. David Moore who was on active duty with the U.S. Army. Dave had various overseas assignments during which time they stayed in touch and when he returned to the States he was assigned to Ft. Leonard Wood, near Waynesville. They dated and they eventually married in Rolla, Missouri on March 04, 2000, and began their life together living in Waynesville. Kim had now begun the role of not only housewife & mother but also that of being Dave’s’ support system to aide him in his military career efforts. During his absences she also worked full time outside of the home as a Social Worker. It was during this period that she earned her Sociology degree. She was a kind and devoted wife and mother. Anyone that knew her knows that she was extremely intelligent, witty & to the point. As Dave moved up in the enlisted ranks he eventually applied for and was accepted into the Officers Course where he earned the rank of 2nd Lieutenant. Dave, Kim and Kim’s’ son David Taylor Wilson continued to live in Waynesville. With the various war efforts going on Dave was on deployment often thus Kim’s role became even more important. She worked hard as a leader in the Officer’s Wives Organization on Ft. Leonard Wood while also fulfilling her role on the home front. She took great pride in supporting her husband not only while he was overseas but also in the many state side Army events that were a necessary part of being an officers’ wife. Having reached the rank of a Major, Dave retired from the active duty military while on assignment with the Army Corp of Engineers in St. Louis, Missouri. He, Kim and son David lived in Wentzville during this time. Following his retirement he remained with the Corp of Engineers as a civilian where he remains today and the family home remains in Wentzville. Kimberly was preceded in death by her Maternal Grandparents John Alva Friend & Dorothy Jean (Cates) Friend of South Greenfield, her Paternal Grandparents David W. Wilson & Margie (Roberts) Wilson of Lusk, Wyoming, her Uncle John Cates Friend of Springfield, Missouri and numerous other relatives. She is survived by her husband David Moore of the home, parents David Frank & Johnna Jane (Friend) Wilson of the St. Robert area, her son David Taylor Willson of the St. Robert area, a sister Alisha Jane (Wilson) Cartwright and husband Charles, niece Kailey Jane Cartwright, nephews Sean Parker Cartwright and Zachary Charles Cartwright all of the St. Robert area, an aunt Jennifer Jean (Friend) Ayer and husband Mike of San Clemente, California, cousin James Robert Friend also of San Clemente, California and numerous other relatives. She will be missed tremendously by all that knew her. Graveside services with military honors were held at 11:00 a.m. Thursday, April 6, 2017 in the Pennsboro Cemetery of Greenfield, Missouri with Pastor Scott Houston officiating. Military honors were provided by the Missouri Honors Team. Arrangements were under the direction of Memorial Chapels and Crematory of Waynesville / St. Robert. Memorial contributions may be made in memory of Kimberly Moore and left at the funeral home.

Kimberly Rae (Wilson) Moore, daughter of David & Johnna Wilson of the St. Robert area, passed away peacefully at her home in Wenztville, MO on April 02, 2017 with her family at her bedside. She had attained the age of 46 years, 4 months and... View Obituary & Service Information

The family of Kimberly Rae (Wilson) Moore created this Life Tributes page to make it easy to share your memories.