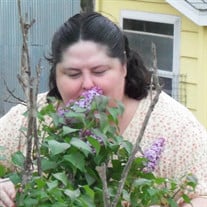 Kimberly Jo Young was born to the late Thomas Garland and Linda Kay (Carroll) Lynch, on October 25, 1967, in Waynesville, Missouri. Kimi spent her life living in Richland, Missouri. She graduated from Laquey High School in 1985. Of any of her classed, she enjoyed Art the most and was a very talented painter. At an early age, Kimi made a profession of faith and followed in baptism at Seller’s Creek. She was a member of Beulah Baptist, Richland, Missouri. On December 24, 1991, Kimi was united in marriage to Larry Jeffries, whom she later separated from. Together, they were blessed with one daughter, Andrea, who was the pride of Kimi’s life. She relished the times she was able to spend with Andrea. Wherever Kimi and Andrea went, they usually had Kimi’s niece, Kenzie in tow, who was just her other child. Kimi’s love for animals started at a very early age and she always had many pets. This never changed throughout her life as any stray she found was made a part of the family. She loved horses and found joy in her poodles, Hoover and Homer. Kimi was an excellent caregiver, working for many families and also in group homes for many over several years. She spent most of her time caring for physically disabled children and adults. This carried on into caring for her mother at the end of her life. The majority of Kimi’s career was spent working in St. Robert, at Willard Quarries as a scale house operator. It was there that she met her husband, Kenny. They were joined in marriage on October 18, 2004. On May 16, 2015, Andrea married James Reinhart, and Kimi gained a son. James and Andrea gave Kimi the greatest gift of all, a precious grandchild. However, she received double excitement and blessings as it was announced that Andrea would be having twins! Amelia and Isabella were Kimi’s greatest joy. She loved getting to spend time with them and having sleepovers at her house for the weekend. When she wasn’t able to be with them she enjoyed getting to talk to them on the phone. Soon, another grandchild followed; this time, a bouncing baby boy named, Benjamin. Kimi touched many lives throughout her years, whether that was a caregiver, a babysitter, a friend, or as family. She had a personality that many enjoyed. She loved spreading happiness wherever she went, especially by getting to cook for somebody. Kimi leaves to cherish her memory, her husband, Kenny Young of Richland, MO; one daughter, Andrea Reinhart (James) of Moberly, MO; two granddaughters, Amelia and Isabella; one grandson, Benjamin; sister, Christy Adams (Bill) of Richland, MO; special niece, MacKenzie Murphy of Richland, MO; nephew, Paul Adams (Samantha) of St. Robert, MO; Step-daughter, Roni Carpenter (Woody) of Lebanon, MO; step-grandchildren, Destiny and Cody; numerous, aunts, uncles, cousins and friends. Kimi was preceded in death by her parents, Tom and Kay, maternal & paternal grandparents, aunts and uncles. A Celebration of Life service was held at 11:00 a.m., Saturday, March 17, 2018, in Beulah Baptist Church, Richland, MO, with Rev. Larry Atkins officiating. Soloist, Melani Biggers sang a beautiful song. Inurnment followed in the Beulah Cemetery, Richland, MO. Arrangements were under the care & direction of Memorial Chapel of Richland.

Kimberly Jo Young was born to the late Thomas Garland and Linda Kay (Carroll) Lynch, on October 25, 1967, in Waynesville, Missouri. Kimi spent her life living in Richland, Missouri. She graduated from Laquey High School in 1985. Of any of her... View Obituary & Service Information

The family of Kimi Jo (Lynch) Young created this Life Tributes page to make it easy to share your memories.

Kimberly Jo Young was born to the late Thomas Garland and Linda...