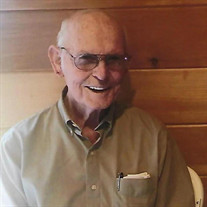 Kinneth grew up in a country home about 3 miles southeast of Swedeborg, Missouri and attended Hickory Grove (Flee Hollow) School. He attended Swedeborg High School and then quit school to go work at General Motor in St. Louis. On January 9, 1951, he was drafted into the Army and served with the Hq Co. 6th Armed Division of Ft. Leonard Wood. He served his country faithfully until his honorable discharge on January 9, 1953. He spent time in Alaska and attained the rank of Corporal. After two years of courting, Kinneth was united in marriage to a young girl from Richland by the name of Mae Louise Manes. They were married on October 2, 1951 in Mountain Home, Arkansas and shared over 69 years of marriage together. They were blessed with many wonderful memories and one child, Lisa Jean York. On November 9, 1943, Kinneth made a profession of faith in the Lord Jesus Christ at Bethlehem Baptist Church of Richland. He was baptized in the Gasconade River and was a faithful member of the Bethlehem Baptist Church where he served as a deacon. He was also a 58-year member of the Masonic Lodge #385 AF & AM of Richland. In 1957, Kinneth began working at the International Shoe Company in Richland until they closed the factory in 1962. He then went to work as a cook for the Missouri Department of Corrections at the Algora Prison in Jefferson City for four years. In 1966, he became a civil service employee at Fort Leonard Wood as a plumber and pipefitter. He retired on June 13, 1974 after suffering a heart attack. After quite some time, Kinneth went back to work and was employed with the Pulaski County Sheriff Paul Long and worked there for 16 years. In his spare time, Kinneth enjoyed being outdoors fishing. But he especially loved to spend time with his family and friends. Kinneth went home to be with his Lord Tuesday, November 24, 2020, in his home at Richland having attained the age of 91 years of age. He will be sadly missed, but fondly remembered by all those that knew and loved him. Kinneth leaves to cherish his memory, his wife Louise of the home; his daughter, Lisa Tallant and her husband, Mark of Richland, MO; two grandchildren, Courtney Toler and husband, Sheldon, and Aaron Tallant and wife, Rachel, all of Bolivar, MO; three great-grandchildren, Jackson, Bennett and Isaac; a number of nieces and nephews; as well as a host of other relatives and friends. In addition to his parents, Kinneth was preceded in death by three sisters: Eula Belle Shultz, Ina Goff, and Flora Bailey. Services were held at 12:00 p.m. Saturday, November 28, 2020 in the Memorial Chapel of Richland with Rev. Billy Williams and Rev. Mark Tallant officiating. Pianist Becky Lercher accompanied soloist Merrel Breyer as he sang “Amazing Grace”, “In the Garden” and “Leaning on the Everlasting Arms”. Serving as escorts were Aaron Tallant, Rex Harrison, Sheldon Toler, Steve Harrison, Ricky Bailey, Roy Mitschele, Mike Bailey, and Doug Baker. Serving as honorary escorts were Gene Boyd, Gary Smith, Wayne King, Mark Mortenson, and Larry Roam. Burial with military honors followed in the Bethlehem Cemetery of Richland, Missouri with honors being provided by the Missouri Honors Team. Memorial Contributions in memory of Kinneth York may be made to the Bethlehem Cemetery Fund and may be left at the funeral home.

The family of Kinneth Earl York created this Life Tributes page to make it easy to share your memories.

Kinneth grew up in a country home about 3 miles southeast of...