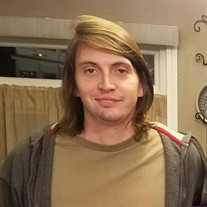 Kyle Curtis Jones, son of Robert Dale Jones, Jr. and Jodi Lynne (Wright) Jones, was born April 16, 1990 in Fort Riley, Kansas. As a young boy, Kyle grew up in a military family and they were transferred to the Fort Leonard Wood, Missouri where he began attending school in the Waynesville R-VI School District. He was very involved in different sports throughout his school years and he graduated from Waynesville High School with the Class of 2008. Kyle continued his education and obtained his Associates Degree from Crowder College in Neosho, Missouri in 2010. In April 2016, Kyle entered the United States Army and served his country until his honorable discharge in May 2018. He had attained the rank of PV2 and earned the National Defense Service Medal, Global War on Terrorism Service Medal and the Army Service Ribbon. In his spare time, Kyle enjoyed sports, listening to music, reading and hanging out with his friends. He loved his family and enjoyed spending time with them. Kyle passed away Wednesday, December 11, 2019 in his home having attained the age of 29 years, 7 months and 25 days. He will be sadly missed, but fondly remembered by all those who knew and loved him. Kyle leaves to cherish his memory, his parents: Bob and Jodi Jones of Waynesville, MO; one brother: Kevin Jones and fiancé, Kyleigh Landreth and their two children, Jalen and Jase of Waynesville, MO; his grandparents: Barb and Bill Ross of Estero, FL, Carol and Sonny Gunter of Council Bluffs, IA and Robert Jones, Sr of Georgetown, TX; his great-grandparents: Clare and Yvonne Serby of Ottawa, IL; his godmother: Pamela Wright of Osceola, MO; his significant other: Lauren Shamhart of St. Robert, MO; several aunts, uncles, nieces, nephews, other relatives and many friends. Kyle was preceded in death by his grandfathers: Barry Dean Wright (2004) and Bill St. Arnold (1997). Services were held at 12:00 p.m. Monday, December 16, 2019 in the Memorial Chapels and Crematory of Waynesville / St. Robert with Chaplain (MAJ) Josh Metz officiating. The songs “The Climb” by Miley Cyrus and “Old Man” by Neil Young were played. Serving as honorary escorts were Kodie Wright, Kristine Wright, Jackson Smith, Marcus Polancic, Grant Brokaw and Dustin Carroll. Burial with military honors followed in the Missouri Veterans Cemetery of Waynesville with military honors being provided by the United States Army of Fort Leonard Wood, Missouri. Memorial contributions may be made in memory of Kyle Jones and may be left at Memorial Chapels and Crematory of Waynesville / St. Robert.

Kyle Curtis Jones, son of Robert Dale Jones, Jr. and Jodi Lynne (Wright) Jones, was born April 16, 1990 in Fort Riley, Kansas. As a young boy, Kyle grew up in a military family and they were transferred to the Fort Leonard Wood, Missouri... View Obituary & Service Information

The family of Kyle Curtis Jones created this Life Tributes page to make it easy to share your memories.