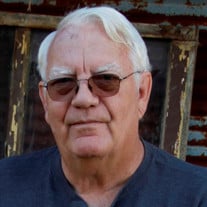 Leonard Wayne Alexander, son of the late Jesse M. and Irene (Allen) Alexander, was born March 20, 1947, in Springfield, Missouri and went home to be in the presence of his Lord the morning of Sunday, March 19, 2017 surrounded by his loving family at his home, in Richland, Missouri at the age of sixty nine years, 11 months and 30 days. “Wayne” as he was known by, grew up in Costa Mesa, California. He moved to Long Lane, Missouri in 1960 and graduated from Buffalo High School in 1965. Wayne accepted Christ as his personal Lord and Savior in 1964 while attending Louisburg Baptist Church. He loved the Lord and served in many churches including being a founding member of Cornerstone Baptist Church of Richland, Missouri. Wayne worked for Stromberg-Carlson Telephone for nine months before being drafted into the United States Army on July 6, 1966. He spent ten months in Germany and received the National Defense Medal and Good Conduct Medal before his honorable discharge on June 16, 1968. Wayne was very humble when it came to talking about his military service to his country however; he had great respect and appreciation when it came to his brother’s in arms and their sacrifices during the Vietnam War. Wayne married his sweetheart, Carol “Sue” Varner, on October 24, 1965 in Louisburg, Missouri and later was blessed by God with two precious children, Shayne and Tisha. Wayne and Sue had enjoyed over fifty years of laughter and love together before his passing. Wayne also worked for United Telephone, which eventually ended up as Centurylink, before retiring in 2012. After years of hard work Wayne was free to enjoy his passion for automobiles whether fabrication or mechanical he was all in. His garage was like his ministry, changing lives of everyone who visited him there with just words of encouragement and truth. Wayne always kept his eye peeled while driving the highways for his next project car. Even his family kept him busy working on lots of projects but he just never seemed to mind. He was an avid race fan and had raced stock cars for several years. Wayne, Sue and grandson Braden, especially loved going to car shows. Wayne was a member of the Fun Runners Car Club and enjoyed the comradery with his friends. However, Wayne’s family was the most important thing to him in this life, especially his four grandchildren who he dearly loved and adored. He was preceded in death by his parents, one brother, Dwain Alexander and one sister, Annie Peterson Wayne was a beloved husband, father, grandfather, brother, uncle and friend and leaves behind to cherish his memory his loving wife: Sue Alexander of the home, one son: Brian “Shayne” Alexander of Richland, Mo; one daughter: Tisha (Brian) Smith of Richland, Mo; one sister: Bettie Christy of Long Lane, Mo; four grandchildren: Jacob Brown, Braden Zayne Alexander, Becca and Monica Smith; several nieces, nephews, other relatives and friends. Though Wayne is gone from our sight, we can find comfort in knowing he’s safely home in the arms of God, and for that reason, we can celebrate his going home. A Celebration of Life Service was held at 3:00 p.m., Sunday, March 26, 2017 in the Cornerstone Baptist Church of Richland, Missouri with Rev. Kevin Barker officiating. A family graveside service was held at 11:00 a.m., Monday, March 27, 2017 in the Missouri Veterans Cemetery, Waynesville, Missouri with Pastor Chuck Baker officiating. Services were under the direction of Memorial Chapel of Richland. Memorial Contributions may be made in memory of Wayne Alexander and may be left at the Memorial Chapel of Richland. Online condolences may be sent to www.memorialchapelsandcrematory.com

Leonard Wayne Alexander, son of the late Jesse M. and Irene (Allen) Alexander, was born March 20, 1947, in Springfield, Missouri and went home to be in the presence of his Lord the morning of Sunday, March 19, 2017 surrounded by his loving family... View Obituary & Service Information

The family of L. Wayne Alexander created this Life Tributes page to make it easy to share your memories.