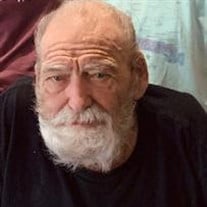 Larry Carl Jeffries, one of nine children born to Alex Carl and Adeline McChord (Green) Jeffries, on a farm near Montreal, Missouri, on March 30, 1942. He went home to God leaving his worries and troubles behind on the bright and sunny morning of December 16, 2021, in Lebanon, Missouri, having attained the age of 79 years, 8 months, and 17 days. Larry grew up in Montreal, Missouri, however, relocated in 1965 to Richland, Missouri where he spent most of his life. On February 14, 1965, Larry married Linda Joyce Henson at Grace Baptist Church in Richland, Missouri, together they shared over fifty-six years together, and were blessed with their four children. He professed his faith in Jesus Christ at an early age. He and his wife were Charter members of Grace Baptist Church in Richland, Missouri, where Larry faithfully served as a Trustee, along with other ministries over the years, as long as his health permitted. The prayers and love received from his church families through the years were near and dear to Larry’s heart. Larry’s work career was that of a welder, a truck driver, and a Lee Factory worker, a Jack of all trade’s kind of a guy. He was a proud supported of the NRA, and North American Hunting Club. In Larry’s spare time he enjoyed collecting guns and coins, being outdoors working on the farm, watching his favorite TV shows, and learning about the history of families, and their lives. Why anyone could go to Larry and ask him about a fifth cousin, twice removed, and Larry could give you a complete run down! “If” you had the time to listen while he untangled the story! He was a fountain of information and loved to share his knowledge to anyone who would listen. One thing you might not know about Larry…he loved being right, never wrong! He is preceded in death by his parents, Alex and Adeline, brothers, Robert “Galen,” Lenny, and “Kenny” Jeffries; and his beloved grandson, William Alex “Will” Jeffries. Larry loved his family and cherished the times they were all together. He leaves behind to cherish his memory, his totally devoted and loving wife, Linda Jeffries of the home; four children: Sinda Willoughby (Roger), Carla Jeffries, Roxie Jeffries, and Larry Jr. (Lori), all of Richland, MO: 10 grandchildren; 14 great-grandchildren; his siblings: Patricia Odom of Richland, MO, Pamala Denny (Larry) of Lebanon, MO, Phyllis Quillen (Roy) of Lake Ozark, MO, Buddy Jeffries of Bethalto, IL, and Penny Brady (Glen) of Montreal, MO; several nieces, nephews, and a host of other relatives, and friends. Larry was tough and had a lot of grit. He would tell ya life had its twists and turns, as life aways does! However, he and Linda held on to God’s unchanging hand, never wavering, as their Lord walked them both through the storms of life, and always together! Services were held at 11:00 a.m., Monday, December 20, 2021, in the Memorial Chapel of Richland with Pastor Chuck Boren officiating. Songs played included, “Outskirts of Heaven,” and “Amazing Grace.” Soloist, Chuck Boren sang “Long Black Train.” Family and friends served as escorts. Larry was laid to rest in the Oaklawn Cemetery of Richland, Missouri. Services were under the care and direction of Memorial Chapel of Richland. Memorial contributions may be made in memory of Larry Jeffries and can be left at the funeral home. Online condolences may be sent to www.memorialchapelsandcrematory.com

Larry Carl Jeffries, one of nine children born to Alex Carl and Adeline McChord (Green) Jeffries, on a farm near Montreal, Missouri, on March 30, 1942. He went home to God leaving his worries and troubles behind on the bright and sunny morning... View Obituary & Service Information

The family of Larry Carl Jeffries created this Life Tributes page to make it easy to share your memories.

Larry Carl Jeffries, one of nine children born to Alex Carl and...