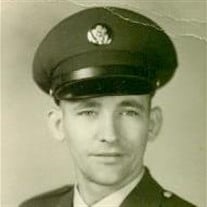 Larry William Nobles, son of the late William James and Opal Fern (Dunlap) Nobles, was born January 23, 1938 in Kansas City, Missouri where he grew up and attended school. In 1961, Larry entered the United States Army and served his country faithfully until his honorable discharge in 1965 at Fort Bliss, Texas. While being stationed at Fort Bliss, Larry met Maria Corral and they were united in marriage on May 22, 1965 in Alhambra, California. They were blessed with over 50 years of marriage together and one daughter, Kathy. After being discharged from the military, Larry moved to California and worked in the shipyards and also as a truck driver. He, Maria and Kathy later moved to Lake Ozark, Missouri where he drove a truck and retired. In 2006, Larry and Maria decided to move to Lebanon, Missouri and where they remained. Larry was an active person and loved to travel, especially on his Harley Davidson. He was a member of a motorcycle club and took every opportunity to get on his bike and ride, until he was not able to do so because of his health. He also liked to customize motorcycles, cars and trucks and just enjoyed tinkering with lots of different things, including woodworking. Larry passed away Saturday, March 3, 2018 in the Lebanon North Nursing and Rehab Center of Lebanon, Missouri having attained the age of 80 years, 1 month and 11 days. He will be sadly missed, but fondly remembered by all those that knew and loved him. Larry leaves to cherish his memory, his daughter: Kathy Mills of Richland, MO; one grandchild: Rrie Mills of Richland, MO; two great grandchildren: Courtney and Xriss Bishton; two sisters: Billie Messmer of Kansas City, MO and Dorothy Mardorf of Riverside CA; two brothers-in-law: Arthur Corral (Linda) of El Paso, TX and Jerry Hoose of Jefferson City, MO; two nieces: Diana Skaggs and Brenda Robinson; one nephew: Mike Hoose; other relatives and friends. In addition to his parents, Larry was preceded in death by his wife, Maria (2015); one great grandson: Aaron Joseph Bishton (2012), who Larry was very close to; two sisters: Betty Lara, Patsy Smiddy; two nieces: Charlene Sweet and Barbara Woody; and one nephew: Chuck Hoose. Graveside services with military honors were held at 3:00 p.m. Wednesday, March 7, 2018 in the Missouri Veterans Cemetery of Fort Leonard Wood, Missouri with Bro. Bob Scoby officiating. Military honors were provided by the United States Army and the Missouri Honors Team. Services were under the direction of Memorial Chapels and Crematory of Waynesville / St. Robert. Memorial contributions may be made in memory of Larry Nobles and may be left at the funeral home.

Larry William Nobles, son of the late William James and Opal Fern (Dunlap) Nobles, was born January 23, 1938 in Kansas City, Missouri where he grew up and attended school. In 1961, Larry entered the United States Army and served his country... View Obituary & Service Information

The family of Larry William Nobles created this Life Tributes page to make it easy to share your memories.