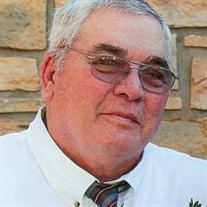 Larry Robert Patton, son of the late James “Linvil” and Ruby Irene (Allen) Patton, was born September 6, 1945 in Waynesville, Missouri. Larry grew up in Pulaski County, attending school in Richland. He loved playing basketball and played all four years before graduating in 1963. On January 12, 1963, Larry was united in marriage to Cheryl Lee Evans in Crocker, Missouri. They shared over 53 years together and a lifetime of many wonderful memories. Larry made a profession of faith and was baptized at First Baptist Church of Richland, Missouri, where he was a member. Larry worked three years at the University of Missouri, seven years at the Commissary in Fort Leonard Wood and twenty years for Guys before retiring to run C&L Farms alongside his wife, Cheryl. Farming was his passion. He could always be found on his tractor; his John Deere tractor that is; to him there was no other. Larry enjoyed showing his livestock at the County Fairs where he could laugh, and joke around with his many friends and neighbors. Larry loved watching NASCAR racing in his spare time and also enjoyed hunting until his eye sight failed him. Larry’s family were his pride and joy, and he was never happier than when he was spending time with them, especially his grandkids and great- grandkids, cherishing each and every moment with them. On the afternoon of Tuesday, July 19, 2016, with his devoted family by his side, Larry entered into his heavenly home, having attained the age of 70. Larry leaves to cherish his memory, his wife: Cheryl of their home in Stoutland, MO; two daughters: Leah Ann Henson (Ron) of Richland, MO, Lisa Jones(Greg) of Stoutland, MO; 5 grandchildren: Ashley Newell (James), Andrew Douglas (Becky), Adam Douglas (Stevie), Joe Henson (Caitlin) and Gib Henson (Paige); 7 great grandchildren: Wyatt, Jocelynn, Ma’Kennan, Blake, Ruby, London, Kynlee; one brother: Lloyd Patton of Lebanon, MO; one sister: Mary Patton of Richland, MO; his uncle: Tom Allen of Richland, MO; and his special friends, Russ and Becky Camilleri of Richland, MO, Mike and Janis Burdiss of Stoutland, MO; several nieces, nephews, other relatives and friends. Larry also leaves behind his best pal, “Patty dog.” They were inseparable, and always went everywhere together. In addition to his parents, Linvil and Ruby Patton, Larry was preceded in death by his parents, one brother, Tommy Patton, one sister, Sharon, one grandson, Spencer Henson, his father and mother-in-law, Bill and Twyla Evans, a brother-in-law, Terry Evans and his wife, Deanna. Larry will be sadly missed but fondly remembered by all those who knew and loved him. Services were held at 2:00 p.m., Friday, July 22, 2016 in the Memorial Chapel of Richland with Pastor Jimmy Moore officiating. Grandchildren, Ashley Newell, Andrew Douglas and Adam Douglas shared special loving memories about their grandpa. Favorite recorded music included “There You’ll Be,” “That’s My Job,” and “Grandpa.” Serving as escorts were Andrew Douglas, Matt Evans, Brad Evans, Adam Douglas, Joe Henson, Mike Evans, Gib Henson, James Newell and Mark Patton. Honorary escorts included Mike Burdis, Art Bryant, Jerry Stenson, George Feldmiller, PF Miller and Russ Camilleri. Burial followed in the Oaklawn Cemetery, Richland, Missouri. Services were under the direction of Memorial Chapel of Richland. Memorial contributions are suggested in memory of Larry Patton to the Blessings in a Backpack Ministry, or the Richland Alumni and may be left at the funeral home. Services are under the direction of Memorial Chapel of Richland. Online condolences may be left at www.richlandmemorialchapel.com

The family of Larry Robert Patton created this Life Tributes page to make it easy to share your memories.