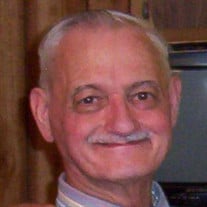 Larry Clayton Suggs, son of the late William Harold and Minnie Irene (McCain) Suggs, was born December 3, 1942 in Santa Rosa, California. As a young boy, Larry and the family moved to the Licking / Salem, Missouri area where he grew up and attended school. He graduated from Licking High School with the Class of 1960. After graduation, Larry worked on the family farm for two years before joining the United States Air Force in 1962. He served his country faithfully until his honorable discharge in 1974. In 1961 at New Harmony Baptist Church in Dent County, Larry made a very important decision in his life and accepted Jesus Christ as his personal Savior. Larry answered the call to preach in 1974 and he became a bi-vocational pastor. He served at First Baptist Church of Jerome (1976-1978), First Baptist of Hawkeye (1978-1982), assistant pastor at St. Robert First Baptist Church (1982-1984) and Fairview Baptist Church (1984-2011). He retired from pastoring at Fairview Baptist after 26 years of service. For his working years, Larry worked for KSMO Radio in Salem as a disc jockey and salesman, worked for Coca -Cola and then in 1975 he began working at Fort Leonard Wood, Missouri and retired in 2006. On September 15, 1967, Larry was united in marriage to Trudy Elaine Stites in Licking, Missouri. They shared over 50 years of marriage together and were blessed with one son: William Stanley Suggs. In his spare time, Larry enjoyed being on his computer with his flight stimulator, but his main enjoyment came from playing music. He played the violin, mandolin and harmonica and loved playing all music, but especially the hymns of the church. Larry went home to be with his Lord on Saturday, March 24, 2018 in the Mercy Hospital of Springfield, Missouri having attained the age of 75 years. He will be sadly missed, but fondly remembered by all those that knew and loved him. Larry leaves to cherish his memory, his wife: Trudy Suggs of the home; one son: Bill Suggs (Shelly) of Camdenton, MO; one sister: Linda Hubbs of Bellefontaine, OH; eight grandchildren; five great grandchildren; several nieces, nephews, other relatives and friends. In addition to his parents, Larry was preceded in death by two brothers: William Russell and John Alan Suggs. Services were held at 1:00 p.m. Saturday, March 31, 2018 in the Fairview Baptist Church of Laquey, Missouri with Pastor Francis Stiles officiating. Rhonda Pool read the obituary and the songs “Just A Rose Will Do” and “Will There Be Any Stars in my Crown” were played. Serving as escorts were Jim English, Bill Suggs, Jason Dixon, Devin Suggs, Brandon Suggs, Larry Eichleberry, Joe Webber and Al Weinreich. Burial followed in the Fairview Cemetery of Laquey, Missouri. Memorial contributions may be made in memory of Larry Suggs to the Fairview Cemetery Fund and may be left at the funeral home.

Larry Clayton Suggs, son of the late William Harold and Minnie Irene (McCain) Suggs, was born December 3, 1942 in Santa Rosa, California. As a young boy, Larry and the family moved to the Licking / Salem, Missouri area where he grew up... View Obituary & Service Information

The family of Bro. Larry Clayton Suggs created this Life Tributes page to make it easy to share your memories.