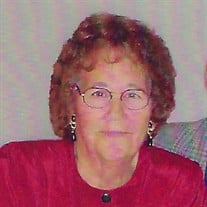 Hazel Laura (Plummer) Richardson New, daughter of the late Walter and Zona (Treat) Plummer, was born May 10, 1927 in Flippin, Arkansas. As a young girl, Laura grew up in the Paris, Arkansas and at the age of 15 moved to Texas. She later moved to California where she worked as a waitress and was also employed at several different factories…Airplane Factory during WWII, Lemon Packing House, Stokley Frozen Foods and Ventura Family Farms. In 1953, Laura moved back to Missouri and served as a foster parent and homemaker’s assistant. In her spare time, Laura loved being outdoors. You could find her either fishing, showing horses or (according to Laura) going on lots and lots of trail rides. On December 26, 1997, Laura was united in marriage to Wade Hampton New. They shared over 11 years of marriage together and many wonderful memories. Laura loved her family tremendously and in her later years, her great grandchildren were the apples of her eye. She loved every moment she could spend with her family. Laura had made a profession of faith and was a member of the Idumea Baptist Church for many years. She loved singing at church, and you could catch her even humming a tune at home. Laura went home to be with her Lord, Thursday, January 30, 2020 in the Lake Regional Hospital of Osage Beach, Missouri having attained the age of 92 years. She will be sadly missed, but fondly remembered by all those who knew and loved her. Laura leaves to cherish her memory two children: Larry Hudspeth of Laquey, MO and Karen Kelley (Bryce) of Willard, MO; stepson: Steven New of Laquey, MO; one brother: Junior Plummer of the state of Louisiana; four grandchildren: Katherine, Tobiah, Halsey and Callie; six great grandchildren: Blaine, Bailee, Brooklin, June, Amara and Madden; several nieces, nephews, other relatives and friends. In addition to her parents, Laura was preceded in death by her husband: Wade New; two daughters: Sheila Parker and Iris Richardson; one granddaughter: Ashley Carr; one brother: Truman Plummer; and one sister: Juanita Wadley. Funeral services were held at 11:00 a.m. Tuesday, February 4, 2020 in the Idumea Baptist Church of Laquey, Missouri with Pastor Danny Graves officiating. The congregation sang “I Saw the Light”, “Amazing Grace” and “Victory in Jesus”. Serving as escorts were family and friends. Burial followed in the Idumea Cemetery of Laquey. Services were under the direction of Memorial Chapels and Crematory of Waynesville / St. Robert. Memorial contributions may be made in memory of Laura New to the Missouri Baptist Children’s Home and may be left at Memorial Chapels and Crematory of Waynesville/St. Robert.

Hazel Laura (Plummer) Richardson New, daughter of the late Walter and Zona (Treat) Plummer, was born May 10, 1927 in Flippin, Arkansas. As a young girl, Laura grew up in the Paris, Arkansas and at the age of 15 moved to Texas. She later... View Obituary & Service Information

The family of Laura (Richardson) New created this Life Tributes page to make it easy to share your memories.