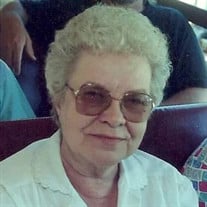 Lavada Marie Hammock, daughter of the late Wesley D. and Mae Marie (Rhoades) Howard, was born September 1, 1935 in Joliet, Illinois. As a young girl, Marie attended rural schools around Aurora and Wilmington, Illinois. The family later moved to Texas County, Missouri, due to her father having a saw mill. In 1949, they relocated to Richland and Marie graduated from Richland High School. At the age of 13, Marie met a young boy named David Lee Hammock, who worked for her father at the saw mill. On July 15, 1954, Marie and Lee were united in marriage and they shared over 33 years of marriage together and were blessed with one daughter, Glenda Sue. Shortly after graduation, Marie moved back to Illinois where she worked in restaurants and then in 1970 she worked at Island Restaurant in Wilmington until 1980. In 1983, Marie moved to Buckhorn, Missouri and rented a snack bar from Ted Williams, known as Marie’s, and ran that for 4 years before managing the coffee bar at Phelps County Regional Medical Center which she did until she retired in 1999. In her spare time, Marie enjoyed watching television and reading. She was on the board for the Waynesville / St. Robert Senior Citizens Center and the Coalition Board for Dixon, Crocker, Waynesville and Richland. As a young girl, Marie had made a profession of faith and was a member of the Buckhorn Baptist Church and the last several years, she attended New Friendship Baptist Church with her good friends Wes and Mary Lou Ellzey. Marie passed away Saturday, September 23, 2017 in the Life Care Center of Waynesville, Missouri having attained the age of 82 years. Marie Hammock is survived by two siblings: Bonnie Levleit and John Howard; special friends: Wesley and Mary Lou Ellzey, Ruth Goodrich, and Bob and Gale Lewis; many wonderful friends. In addition to her parents and husband, Marie was preceded in death by her daughter, Glenda Sue Hammock. Graveside services were held Tuesday, September 26, 2017 in the Fairview Cemetery of Laquey, Missouri with Pastor Chris Hendrix officiating. Serving as escorts were family and friends. Services were under the direction of Memorial Chapels and Crematory of Waynesville / St. Robert. Memorial contributions may be made in memory of Marie Hammock to the Waynesville / St. Robert Senior Center and may be left at the funeral home.

The family of Lavada Marie Hammock created this Life Tributes page to make it easy to share your memories.