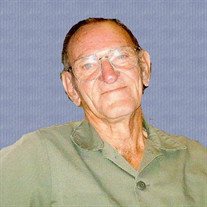 SFC (Ret) Lawrence “Dick” Clayton, son of the late Charles Enoch and Nola Clayton, was born August 17, 1934 in Newark, Indiana. He passed away Saturday, September 26, 2015 in his home having attained the age of 81 years. Dick grew up in Bloomington, Indiana where he attended school. In 1954, Lawrence entered the United States Army and served his country faithfully until 1975. For his faithful service, Dick earned several awards and commendations; some of which include: Good Conduct Medal (4th Award), 1 Overseas Bar, Vietnam Campaign Medal, National Defense Service Medal and Army Occupation Medal (Germany). He had attained the rank of Sergeant First Class. On January 11, 1985, Dick was united in marriage to Donna (Schmidt) Sparks in Bicknell, Indiana. Upon their marriage, two families were blended and they shared many wonderful memories. Dick had made a profession of faith and was currently a member of the Church of the Nazarene in Waynesville, Missouri. In his spare time, Dick enjoyed being outdoors while fishing. He loved to read western books, especially Louis L’Amour, working in his workshop and selling metal to the scrap yard. He loved visiting with people and hugging the ladies. In the past, he was a member of the Lions Club in Indiana. Most importantly, he loved spending time with his family and friends. Dick will be sadly missed, but fondly remembered by all those that knew and loved him. He leaves to cherish his memory his wife: Donna of the home; three children: Joannie, Charles and Nola Clayton and their mother Eleanor; one stepson: Jason Sparks; four grandchildren; eight great grandchildren; two brothers: Floyd Clayton and John Shake; several other relatives and friends. In addition to his parents, Dick was preceded in death by three brothers: Allen, Ralph and Philip; three sisters: Edith, Jessie and Alice; and two stepchildren: Tony Sparks and Gayla Flick. Inurnment with military honors was held at 3:00 p.m. Friday, October 9, 2015 in the Missouri Veterans Cemetery of Waynesville. Military honors were provided by the United States Army of Fort Leonard Wood, Missouri. Memorial services were held at 12:00 p.m. Saturday, October 10, 2015 in the Church of the Nazarene of Waynesville, Missouri with Pastor Jason Stevens officiating. Dianne Presley sang “Fourth Man Walking” and Christy Lindberg sang “Praise to the Lord”. Arrangements were under the direction of Memorial Chapels and Crematory of Waynesville / St. Robert.

The family of SFC (Ret) Lawrence Richard Clayton created this Life Tributes page to make it easy to share your memories.