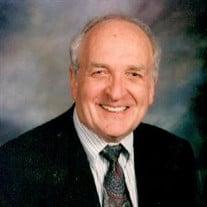 Lee William Ousley was born March 3, 1935 in Flat, Missouri and was raised by Leona Ruth Blue in Newburg. When Lee was three years of age, Leona married William Everett Ousley and shortly thereafter moved to California. Years later they returned to Missouri and bought a farm in Dixon. Lee attended Dixon and Alton High School with his best friends, Bill Jennings and Dustin Shelton and they graduated in 1953. Working his way through life, Lee and Bill were employed at Chrysler Motor Company in Detroit. That is where he met his first wife, Barbara Ann Bussard. Lee entered the United States Air Force and scored so highly, he had many choices, deciding to become a nuclear weapons technician which was the most logical and challenging option as this was just prior to the Cold War. He was stationed in Morocco, North Africa at a somewhat non-existent base. Lee’s love of photography began in North Africa and continued throughout his life, taking professional classes and joining groups. He shot wildlife (with fear), flowers, family, and of course motorsports. Returning stateside, he and Barbara moved to California and fathered his first daughter Cheryl. Missouri lured him back to Dixon upon his discharge where he worked and attended Missouri School of Mines in Rolla at night. He completed his Electrical Engineering Degree after adding another daughter, Rebecca and finally his last child Todd, both born in Waynesville, Missouri. General Motors employed Lee in Dayton, Ohio at the Delco Products Division where he excelled and became a lead engineer on several projects, sometimes leading teams of 20 to 30 other engineers. While raising a family of five and working 2nd and 3rd shift worked, Lee attended Xavier University at night in Cincinnati, Ohio where he earned a Master’s Degree in Business Administration. The family quickly moved to Florida in the fall of 1972 when Lee accepted the position of engineering manager for Joseph Schilitz Brewing Company. He was tasked with designing, layout, and machinery specification and construction oversight of their new container division. By this time, he had top tier acuity for process manufacturing. While in Florida, he owned and operated a Goodyear franchise, started his own A/C and Roofing companies assisted by his good friend, Kenny Sommers. He served on the Florida Public Service Administration with Regulatory oversight over telephone and utility companies. He served on the Temple Terrace Chamber of Commerce, County License Review Board and Hillsborough United Methodist Church construction and investment committee. He married Carletta Molter in 1991 and returned to Missouri with her to begin contracting and construction projects with his brother Bill Ousley and assisting on various endeavors in the Waynesville and surrounding areas including Fort Leonard Wood. He served this community as a Committee Member of Waynesville United Methodist Church, Credit Union Board Member, Chairman of the Pulaski County Sewer Board; Service Corps of Retired Executives-helping people turn dreams and ambitions into businesses in the community. Lee mentored and befriends local folks who wanted to improve their business and lives. Perhaps what he found most rewarding was his 11+ years as faculty for Webster University’s business administration graduate program where he taught undergraduate strategies in business on through the MBA capstone classes for over 11 years. He had a passion for automobiles that stop quickly, throw you against the doors violently while turning and flatten your boot whilst accelerating. Through the years, he belonged to Tri-city Corvette Club, MacDill Sports Car Club, University of South Florida Sports Car Club, Sports Car Club of America, National Council of Corvette Clubs, Cave State Cruisers and a few more. Lee even founded his own organization, C.A.T., the Corvette Association of Tampa which focused only on competition, which was his forte. He was a top shelf dominant competitor who proved both engineering skill with his machines and raw talent with aggression behind the wheel forged the original intimidator long before that Dale somebody. Lee was “The Man” everywhere he worked and played. Lee passed away Monday, January 16, 2017 in the Barnes Jewish Hospital of St. Louis, Missouri having attained the age of 81 years. Lee is survived by his wife, Carletta Ousley of the home; three children: Todd William Ousley, Jesse Romano and Suzanne Bagg, all of Riverview, FL; six grandchildren: Heather Courtier, Adam Freed, Nicole Lundgren, Nigel Pitman, Eleonore Polidori and Nicholas Della Sala; two great grandchildren: Ronan and Mila; several nieces, nephews, other relatives and friends. Services were held at 2:00 p.m. Friday, January 20, 2017 in the Memorial Chapels and Crematory of Waynesville / St. Robert with Pastor Patrick Moore officiating. Soloist Becky Lercher sang “Holy, Holy, Holy” and “Amazing Grace”. Serving as escorts were Ken Summers, Raymond Rivard, Tom Elliott, Tom McGee, Thamer Main and Todd Ousley. Serving as honorary escorts were Jim Godfrey, Danile Fletcher and Luke Main. Burial with military honors followed in the Roach Cemetery of Doolittle, Missouri. Military honors were provided by the Missouri Honors Team. Memorial contributions may be made in memory of Lee Ousley and may be left at the funeral home.

The family of Lee William Ousley created this Life Tributes page to make it easy to share your memories.