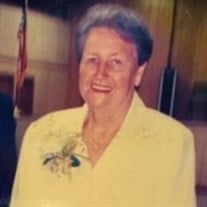 Lenna Jo (Roam) Ferguson, daughter of the late Charles Wesley Roam and Lena Fay (Miller) Roam, was born April 8, 1937 in Pulaski County, Missouri. On June 21, 1952, Lenna was united in marriage to the love of her life, James K. Ferguson. They shared over 67 years of marriage together and were blessed with four children: Teresa, Rhonda, Mark, and Kenneth. James preceded her in death on August 28, 2019. At an early age, Lenna dedicated her life to the Lord and was a faithful member of the Harvest Tabernacle Church of Lebanon, Missouri for many years until her health failed. Even when she was not able to attend in person, she still watched the services online. When she worked outside of the home, Lenna’s servant heart was still on display because she was the head cook for the Laquey School District and also cooked and baked for several restaurants. She enjoyed feeding and taking care of others, which was evident in what her grandkids lovingly referred to as “family dinner night”, where everyone including cousins and friends ate a homecooked meal that she prepared every Friday night. And we don’t want to forget to mention her homemade cinnamon rolls every Christmas morning. In her spare time, Lenna loved fishing at the Lake of the Ozarks and listening or watching St. Louis Cardinal baseball games. Her greatest enjoyment came from her grandkids and great grandkids. She chauffeured them to numerous practices and hardly ever missed one of their activities. As her health declined, she would follow them all through social media. Lenna loved her family dearly and always enjoyed spending time with them. Lenna went home to be with her Lord Wednesday, December 29, 2021 in her home having attained the age of 84 years. She will be sadly missed, but fondly remembered by everyone that knew and loved her. She leaves to cherish her memory, her three children: Teresa McFarland of Waynesville, MO, Rhonda Cogar of Oklahoma City, OK, and Kenny Ferguson (Brenda) of Washburn, MO; six grandchildren: Kristen Bench of Waynesville, MO, Jessica Zeger of Chillicothe, MO, Bryan Cogar (Ashley) of Nichols Hills, OK, Steven Cogar (Carlyn) of Mocksville, NC, Kayla Ferguson of Joplin, MO, and Tyler Ferguson (Rachel) of Bentonville, AR; nine great grandchildren: Kourtney Barton, Kaitlyn Bench, Kaylie Bench, Taylor Bench, Grayson Anderson, Grant Cogar, Davis Cogar, Cora Cogar, and Bryce Cogar; one sister: Violet Fritts of Eureka, MO; four sisters-in-laws: Lois Rearrick of Waynesville, MO, Geraldean Wallace of Louisburg, MO, Shirley Roberson of Richland, MO, and Wanda Ferguson of Waynesville, MO; numerous nieces, nephews, other relatives and friends. In addition to her parents and husband, Lenna was preceded in death by one son: Mark Ferguson; and seven brothers: Guy, Chuck, Fred, Bob, Bill, Leo, and David. Funeral services were held at 11:00 a.m. Tuesday, January 4, 2022 in the Memorial Chapels of Waynesville with Pastor Chris Thornton officiating. The songs “Amazing Grace”, “How Great Thou Art”, “In the Sweet By and By”, and “Scars in Heaven” were played. Serving as escorts were Bryan Cogar, Steven Cogar, Tyler Ferguson, Ronnie Bowling, Tommy Bowling, and Bradley Roam. Serving as honorary escorts were Carroll “Buzz” Hendrix, James “Zeke” Anderson, and Brett Waterhouse. Burial followed in the Buckhorn Cemetery of Waynesville. Memorial contributions may be made in memory of Lenna Ferguson to the Buckhorn Cemetery Fund and may be left at Memorial Chapels and Crematory of Waynesville / St. Robert.

The family of Lenna Jo Ferguson created this Life Tributes page to make it easy to share your memories.