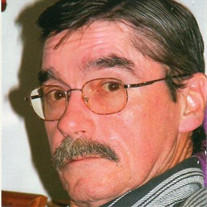 Leonard Dale Henry, otherwise known as “Stymie” to all his friends and family, was born on August 15, 1949, in Richland, Missouri, to the late Virgil Roy and Mae Belle (Brown) Henry. Stymie grew up and attended school in Richland. On April 21, 1970, Stymie was inducted into the United States Army and proudly served his country until his honorable discharge in 1971, earning the National Defense Service Medal. However, Stymie continued to serve in the Reserves until April 20, 1976. When Stymie was younger, he met a wonderful lady by the name of Linda Brandon and together they had a precious little girl, Melva Lynn, who precedes him in death. Stymie was later married to, Tammy Lane and to this union was blessed with two children, Ryan Dale and Kayla. After his marriage ended, Stymie met the love of his life, Sherry Brumley and the two have been inseparable for over 10 years. Together they’ve shared a lifetime of joy and a few heartaches along the way, but their love for one another only grew stronger. Down through the years, Stymie enjoyed working at H.D. Lee, Shade Tree Service, Sundancer Pontoon and Carl Tanner Auto Sales. In his spare time you would find him either in the woods hunting, or at his favorite fishing hole, dropping in a line to catch “The Big One”. He especially loved to watch NASCAR racing. Stymie loved his family dearly, and the times he was able to spend with them were priceless. Stymie always expressed to his family, that he and the Lord had worked all things out and had found peace in his heart. On the afternoon of Monday, April 2, 2018, while surrounded by his loving family Stymie, having attained the age of 68, passed away leaving behind to cherish his memory, the love of his life, Sherry Brumley of Lebanon, MO; his two children: Ryan Dale Henry (Ashley) of Stoutland, MO, and Kayla Goodwin of Lebanon, MO; 7 grandchildren; 7 siblings: Jerry W. Henry of Richland, MO, Gloria M. Holloway (Robert) of Richland, MO, Virginia Jeffries of Richland, MO, Terry G. Henry (Shanna) of Richland, MO, Mary K. “Katie” Sanders (Don) of Richland, MO, Eddie D. Henry (Kathy) of Richland, MO and David E. Henry of Richland, MO; Sherry’s children, Stacey, Amy and Jeremy Brumley, along with 5 more grandchildren whom Stymie loved as if they were his own; several nieces, nephews, other relatives and friends. Stymie was preceded by his parents, Virgil and Mae, one sister, Pauline, five brothers, Jake, Charles, Richard, Lonnie and Roy; one daughter, Melva Lynn. Graveside services with Military honors were held at 1:00 p.m., Thursday, April 5, 2018 in the Missouri Veterans Cemetery, Waynesville, Missouri with Pastor Chris Hendrix officiating. Escorts included, Steven Henry, Danny Henry, Robert “Bert” Holloway, James Jefferies, Craig Miller and Jerry Michael Henry. Honorary escorts were Ryan Dale Henry, Darold Peterson and Tracy Henry. Services were under the direction and care of Memorial Chapel of Richland. In lieu of flowers, memorial contributions may be made in memory of Stymie Henry and may be left at the Memorial Chapel of Richland. Online condolences may be sent to www.memorialchapelsandcrematory.com

Leonard Dale Henry, otherwise known as &#8220;Stymie&#8221; to all his friends and family, was born on August 15, 1949, in Richland, Missouri, to the late Virgil Roy and Mae Belle (Brown) Henry. Stymie grew up and attended school in Richland.... View Obituary & Service Information

The family of Leonard Dale "Stymie" Henry created this Life Tributes page to make it easy to share your memories.

Leonard Dale Henry, otherwise known as “Stymie” to all his friends...