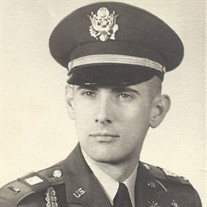 Major (Ret.) LeOren Simpson, 83, passed away Monday, March 18, 2019, at the Kansas City Hospice House with family by his side. He was born in Springfield, Missouri on June 14, 1935, to the late Oren R. and Martha Simpson. He graduated from Richland High School in Richland, Missouri in 1953, followed by three years of service in the Army National Guard. He then attended Southwest Missouri State College in Springfield, Missouri, where he was a cadet in the ROTC program and a member of Sigma Tau Gamma fraternity. He also played college basketball and was an avid and lifelong fan of college basketball and football. He graduated with a Bachelor of Science in 1959 and entered the U.S. Army as a second lieutenant. He served three tours in Vietnam during his 23-year career in the Army and earned several awards and commendations; some of which include: National Defense Service Medal, Republic of Vietnam Campaign Medal, Vietnam Service Medal, Bronze Star Medal, Bronze Star Medal w/1 Oak Leaf Cluster, Meritorious Service Medal, along with several other awards. After retiring in 1980, LeOren moved to Lubbock, Texas, where he lived for 33 years. During that time, he taught high school ROTC for several years. He later worked for the State of Texas as a prison guard, retiring after ten years. LeOren enjoyed country western dancing and college football and basketball. He had a love of history, especially presidential history, and was a member of Phi Alpha Theta history honor society. He belonged to the Grand Lodge A.F. and A.M. of Missouri and to the 16th Infantry Regiment Association. He is survived by his daughter, Tina Simpson-Collins (Ronan) of Kansas City, Missouri, his three grandchildren Ariane, Ciara and Liam, son Erik Simpson of Miami, Florida, sister Ann Simpson Edwards of Columbia, Missouri, nephews Karl and Daniel Stout, and Joseph Edwards. He was preceded in death by his niece, Dr. Karen Stout. In lieu of flowers, please consider donations to the Veteran’s Community Project, Veteran Barbers for Veterans, or any veteran’s organization of choice. Many thanks to Kansas City Hospice House and to the caring staff at Brookdale Overland Park who provided comfort and friendship over the last year.

Major (Ret.) LeOren Simpson, 83, passed away Monday, March 18, 2019, at the Kansas City Hospice House with family by his side. He was born in Springfield, Missouri on June 14, 1935, to the late Oren R. and Martha Simpson. He graduated from Richland... View Obituary & Service Information

The family of MAJ (Ret) LeOren Simpson created this Life Tributes page to make it easy to share your memories.