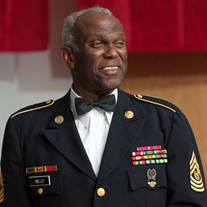 LeRoy Norman Mello, son of the late Peter Vass Mello and Louise (Corey) Mello, was born June 1, 1936 in Marion, Massachusetts where he grew up and graduated from Wareham High School with the Class of 1956. Shortly after graduation, LeRoy entered the United States Army and served his country faithfully until his retirement in 1986. For his faithful service, he had earned several awards and commendations and attained the rank of Command Sergeant Major. LeRoy was very proud of his military career and of serving as President of the Officials Association from 1982 – 1988. While being stationed in Germany for a time, LeRoy met a young lady by the name of Hedwig Presber. They were united in marriage on June 25, 1960 in Aschafenburg, Germany. They shared over 46 years of marriage together and were blessed with two sons, Eddie and Stefan. Hedwig preceded LeRoy in death on November 6, 2006. In 1988, LeRoy continued serving his country as a civil service employee with the US Army Engineering Center on Fort Leonard Wood. He retired in 2003 after 15 years of service. In his spare time, LeRoy enjoyed game shows and playing bingo. He loved sports of all kinds, but especially golf, baseball, and softball. For many years, he served as an official for different sports games. In 2014, he was inducted into the Wareham High School Sports Hall of Fame. LeRoy passed away Sunday, October 31, 2021 in his residence having attained the age of 85 years. He will be sadly missed, but fondly remembered by all those that knew and loved him. He leaves to cherish his memory, his two sons: Eddie Mello of Waynesville, MO and Stefan Mello (Carol) of Avondale, AZ; daughter-in-law: Veena Mello of Memphis, TN; seven children: Maurice Robinson of Bowling Green, MO, Monika Mello of Memphis, TN, Cally Mello of Memphis, TN, Marquis Mello of Wichita, KS, Amy Martin (Colby) of Meta, MO, Elysia Mello of Avondale, AZ, and Kiarra Mello of Normal, IL; seven great grandchildren: Tyson and Dallas of Meta, MO, Ellamaye of Avondale, AZ, Kaidence of Wichita, KS, Ezekiel of Waynesville, MO and Christian and Asia of Memphis, TN; two brothers: Antone Mello (Mary ) of Detroit, MI, and Peter Mello of New Bedford, MA; two sisters: Estella Mello Sequeira of Milford, CT, and Frances Mello of Marion, MA; caregiver: Ora Taylor of Waynesville, MO; several other relatives and friends. Funeral services will be held at 11:00 a.m. Friday, November 5, 2021 in the Memorial Chapels and Crematory of Waynesville / St. Robert. Burial with military honors will follow in the Sunset Memorial Estates Cemetery of Waynesville, MO. Visitation will be held from 9:00 a.m. until time of service at 11:00 a.m. Friday, November 5, 2021 in the Memorial Chapels and Crematory of Waynesville / St. Robert.

LeRoy Norman Mello, son of the late Peter Vass Mello and Louise (Corey) Mello, was born June 1, 1936 in Marion, Massachusetts where he grew up and graduated from Wareham High School with the Class of 1956. Shortly after graduation, LeRoy... View Obituary & Service Information

The family of CSM (Ret) LeRoy Norman Mello created this Life Tributes page to make it easy to share your memories.