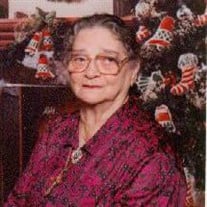 Lillie Murray, daughter of the late James and Nancy Martin, was born August 29, 1916 in Cherryville, Missouri where she spent most of her childhood and attended school. Lillie was united in marriage to Everett Estell Murray on July 2, 1935 and they spent many wonderful years of marriage together before he preceded her in death on March 27, 1990. They were blessed with ten children: Herman, Alice, Erma, Raymond, Enkie, Edna, Randy, Henrietta, Clifford and Rosetta. Lillie was a hardworking woman. She worked for Biggs Cleaners, Jim’s Supermarket and the Waynesville Hospital for many years. In her spare time, Lillie enjoyed quilting, cooking and being outdoors while fishing. Most importantly, she loved to spend time with her family, especially the grandchildren and great grandchildren. As a young girl, Lillie made a profession of faith and was a long time member of New Friendship Baptist Church. She had a strong faith and it was evident throughout her daily life. Lillie went home to be with her Lord Tuesday, May 19, 2015, in Lake Regional Hospital, Osage Beach, Missouri having attained the age of 98 years. Lillie leaves to cherish her memory, her seven children, Herman Murray of Branson, MO, Alice Murray of Waynesville, MO, Erma Skinner of Crocker, MO, Raymond Murray of Wapakoneta, OH, Enkie Rutko of St. Robert, MO, Edna Nelson of New Franklin, MO, and Randy Murray of Lacey Spring, AL; twenty-two grandchildren, twenty-nine great-grandchildren, thirty-three great-great-grandchildren; a half-brother, Clint Martin of Salem, MO; a number of nieces and nephews; as well as a host of other relatives and friends. In addition to her parents and husband, Lillie was preceded in death by three children: Henrietta Juede, Clifford Murray and Rosetta Schnieder; and a number of brothers and sisters. Funeral services were held 2:00 p.m. Friday, May 22, 2015 in the Memorial Chapels and Crematory of Waynesville / St. Robert with Pastor Curtis Hendrix officiating. The songs “Go Rest High on that Mountain” and “Amazing Grace” were played. Serving as escorts were Pat Fincher, Xavier Fincher, K.C. Creviston, Josh Fincher, Raymond Murray, Jr., Allen Chess and Kevin Creviston. Burial followed in the Waynesville Memorial Park Cemetery. Services were under the direction of Memorial Chapels and Crematory of Waynesville / St. Robert. Memorial contributions may be made in memory of Lillie Murray and may be left at the funeral home.

Lillie Murray, daughter of the late James and Nancy Martin, was born August 29, 1916 in Cherryville, Missouri where she spent most of her childhood and attended school. Lillie was united in marriage to Everett Estell Murray on July 2,... View Obituary & Service Information

The family of Lillie Murray created this Life Tributes page to make it easy to share your memories.

Lillie Murray, daughter of the late James and Nancy Martin, was...