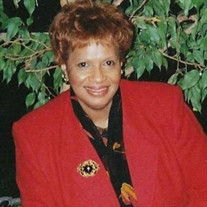 Linda Dean Clyburn, daughter of the late Mottro and Gladys Davidson, was born October 22, 1942 in Warrenton, North Carolina. On May 10, 1960, Linda was united in marriage to Edward H. Clyburn in Atlantic City, New Jersey. They shared over 57 years of marriage together and were blessed with four children: Sheryl, Stephan, Michael, and Terry. Edward went home to be with his Lord on August 23, 2017 and Sheryl on June 19, 2019. At an early age, Linda had made a profession of faith and after coming to the Fort Leonard Wood area, Linda and the family began attending First Baptist Church of St. Robert where she served in various capacities throughout the years. She also assisted her husband as a Gideon Bible representative for a time. She was a very giving person and was willing to help wherever she was needed. Linda served in the United States Army for eight years. For her faithful service, she earned several awards and commendations. In her spare time, Linda enjoyed watching CSI on television. She was fascinated with the ins and outs of the FBI. Most importantly, she loved her family tremendously and she loved getting to spend time with them as much as she could. Linda went home to be with her Lord and be reunited with Edward and Sheryl on Friday, October 2, 2020 in the Phelps Health Hospital of Rolla, Missouri having attained the age of 77 years. She will be sadly missed, but fondly remembered by all those that knew and loved her. She is survived by her three sons, Stephan Clyburn (Ann) of Philadelphia, PA, Michael Clyburn of Waynesville, MO, and Terry Clyburn (Stefanie) of Washington DC; four grandchildren, Nikki Woodard, Brandon Woodard, Jalen Clyburn and Ariel Clyburn; two great-grandchildren, Brooklyn and Braylon Woodard; as well as a host of other relatives and friends. Even though she is gone from our sight, Linda’s loving and giving spirit will live on in our hearts forever. Services were held at 11:00 a.m. Thursday, October 8, 2020 in the Memorial Chapels and Crematory of Waynesville / St. Robert with Michael Clyburn, Linda’s son, officiating. Several friends and family members recalled their wonderful memories of Linda. Memorial Contributions in memory of Linda Clyburn may be left at the funeral home.

Linda Dean Clyburn, daughter of the late Mottro and Gladys Davidson, was born October 22, 1942 in Warrenton, North Carolina. On May 10, 1960, Linda was united in marriage to Edward H. Clyburn in Atlantic City, New Jersey. They shared... View Obituary & Service Information

The family of Linda Dean Clyburn created this Life Tributes page to make it easy to share your memories.