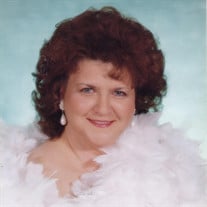 Linda Almeda (Gray) Connour, daughter of the late Freddy Alonzo and Roseannis A. (Prewett) Gray, was born February 12, 1950 in Waynesville, Missouri. She passed away Thursday, May 23, 2019 in her home having attained the age of 69 years, 3 months and 11 days. Linda grew up in Waynesville and graduated from Waynesville High School. Shortly after graduation, on August 26, 1967, Linda was united in marriage to Richard Earl Connour in St. Robert, Missouri. They were blessed with four children and shared many wonderful memories before he preceded her in death. At an early age, Linda attended Clementine Church and in later years, she attended Briarwood Church. Linda worked hard to provide for her family. She worked for Brown Shoe Factory in Illinois and in Dixon, Missouri for several years before she became employed by CFI on Fort Leonard Wood, Missouri where she spent 15 years. She served as cook at the Waynesville / St. Robert Senior Center for 10 years and enjoyed visiting with all the seniors that came in every day. In her spare time, Linda enjoyed being outdoors while fishing or going to yard sales. She liked to collect unusual rocks, but most of all she loved spending time with her grandchildren and her sons. Linda will be sadly missed, but fondly remembered by all those who knew and loved her. She leaves to cherish her memory, her children: Alan Connour, Delmar Connour and Dale Connour, all of St. Robert, MO; seven grandchildren: Katrina Connour of Crocker, MO, Damian Paul of Crocker, MO, Katy Paul of Waynesville, MO, Brandy Connour of Waynesville, MO, Angie Connour of Waynesville, MO, Elizabeth Connour of Waynesville, MO and Richard Connour of St. Louis, MO; two great grandchildren: Michael Buckingham of Beaufort, MO and Allison Wright of Crocker, MO; one brother: Freddy Gray (Judy) of St. Robert, MO; several nieces, nephews, other relatives and friends. In addition to her parents and husband, Linda was preceded in death by one daughter and one granddaughter. Funeral services were held at 11:00 a.m. Monday, June 3, 2019 in the Memorial Chapels and Crematory of Waynesville / St. Robert with Virginia Hill officiating. The songs “Will the Circle Be Unbroken” and “Memories Won’t Die” were played. Serving as escorts were Lee Johnson, JJ Butzler, Matt Butzler, John Godby, Bobby Knapp and Jimmy Gray. Burial followed in the Dry Creek Cemetery of St. Robert, Missouri. Memorial contributions may be made in memory of Linda Connour and may be left at the Memorial Chapels and Crematory of Waynesville / St. Robert. Memorial contributions may be made in memory of Linda Connour and may be left at Memorial Chapels and Crematory of Waynesville / St. Robert.

Linda Almeda (Gray) Connour, daughter of the late Freddy Alonzo and Roseannis A. (Prewett) Gray, was born February 12, 1950 in Waynesville, Missouri. She passed away Thursday, May 23, 2019 in her home having attained the age of 69 years, 3... View Obituary & Service Information

The family of Linda Almeda (Gray) Connour created this Life Tributes page to make it easy to share your memories.