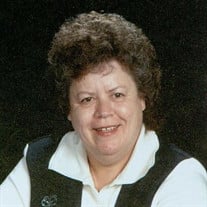 Linda Elizabeth Covert, daughter of the late Wallace and Ingeborg (Stromeier) Wilkes, was born September 20, 1948 in Hameln, Germany. Due to Linda’s father being in the military, her and the family moved back to the United States when Linda was five years of age. They were stationed in Maryland where she attended Mother Seaton School (which is now the FEMA Headquarters) and then graduated from Redlands High School. On November 17, 1967, Linda was united in marriage to a US Army soldier, Ronald Eugene Covert. They were married after a whirlwind romance and they shared the next 47 years together. They shared many wonderful memories and were blessed with two daughters: Sue and Rebecca. Due to Ron being in the military, Linda and the family moved from place to place but while stationed here for a time, she worked for Ted Williams at his steakhouse as a cook and waitress. After returning to the Waynesville / St. Robert area, she began working with EDP on Fort Leonard Wood and retired after 30 years of service. In her spare time, Linda liked working in her gardens, flower and vegetables. Most importantly, she just enjoyed being with her family; whether it was fishing with Ron and giving him a hard time, spending time with her girls and grandkids, or just being with her family, she loved them dearly. Linda passed away Monday, March 16, 2015 in her home after a battle with cancer. She had attained the age of 66 years. She will be sadly missed but fondly remembered by all those knew and loved her. Linda leaves to cherish her memory, her husband: Ronald Covert of the home; two daughters: Sue Covert of Dixon, MO and Rebecca Covert-Como (Charlie) of Richmond, MO; two grandchildren: Patrick Ryan Como and Arwen Isabella Como; several other relatives and friends. In addition to her parents, Linda was preceded in death by her dear Oma. Memorial services were held at 5:00 p.m. Friday, March 20, 2015 in the Memorial Chapels and Crematory of Waynesville / St. Robert with Chaplain Tom Ford officiating. Soloist Becky Lercher sang “When They Ring Those Golden Bells” and the song “Somewhere My Love” and “Soulmate” were played. Memorial contributions may be made in memory of Linda Covert and may be left at the funeral home.

Linda Elizabeth Covert, daughter of the late Wallace and Ingeborg (Stromeier) Wilkes, was born September 20, 1948 in Hameln, Germany. Due to Linda&#8217;s father being in the military, her and the family moved back to the United States... View Obituary & Service Information

The family of Linda Elizabeth Covert created this Life Tributes page to make it easy to share your memories.

Linda Elizabeth Covert, daughter of the late Wallace and Ingeborg...