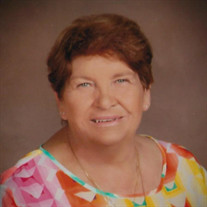 Linda Kay Flanigan, daughter of the late Artis Windham, Sr. and Cleo (Streck) Windham, was born March 16, 1947 in San Antonio, Texas. Linda grew up in a military family and the family moved to various duty stations all around the world. They were in Germany and Okinawa, Japan along with different military posts in the United States. The family came to Fort Leonard Wood as their last duty station and Linda graduated from Waynesville High School with the Class of 1965. After graduating from high school, Linda furthered her education and became a Registered Nurse. She served as a nurse at General Leonard Wood Army Community Hospital, Pulaski County Health Department, Richland Care Center, Hospice and for the last 20 years of her career she was the Director Nursing at Sunset Village of the Ozarks. She served as a nurse for over 40 years and retired in 2018. On May 27, 2000, Linda was united in marriage to Edward Martin Flanigan, Sr. They shared over 20 years of marriage together and many wonderful memories. In her spare time, Linda enjoyed gardening, quilting, and reading and after her retirement she was able to do more of those things that she enjoyed. But most importantly, she loved spending time with her family, especially the grandchildren and great grandchildren. Linda was a member of the St. Robert Bellarmine Catholic Church and she and Ed enjoyed serving wherever they were needed. Linda passed away Wednesday, December 30, 2020 in the Mercy Hospital of Lebanon, Missouri having attained the age of 73 years, 9 months, and 14 days. She will be sadly missed, but fondly remembered by all those that knew and loved her. Linda leaves to cherish her memory, her husband: Ed Flanigan of the home; three children: Lorissa Duffy (Paul Hutchinson) of Sunrise Beach, MO, Marty Flanigan of Waynesville, MO, and Scott Flanigan (Julie) of Waynesville, MO; eleven grandchildren; eight great grandchildren; two sisters: Judy Saunders (Jim) of Lebanon, MO, and Kathy Windham (Greg Davidson) of Kansas City, MO; one brother: Art Windham (Ellie) of St. Robert, MO; several nieces, nephews, other relatives, and friends. In addition to her parents, Linda was preceded in death by one great grandson, Roman (2019). Mass of Christian Burial was held at 11:00 a.m. Friday, January 8, 2021 in the St. Robert Bellarmine Catholic Church of St. Robert, Missouri with Father John Groner officiating. Evelyn Horine provided the music and led the congregation in musical responses. Serving as escorts were family and friends. Interment followed in the Resurrection Cemetery of St. Robert, Missouri. Services were under the direction of Memorial Chapels and Crematory of Waynesville / St. Robert. Memorial contributions may be made in memory of Linda Flanigan and may be left at Memorial Chapels and Crematory of Waynesville / St. Robert.

Linda Kay Flanigan, daughter of the late Artis Windham, Sr. and Cleo (Streck) Windham, was born March 16, 1947 in San Antonio, Texas. Linda grew up in a military family and the family moved to various duty stations all around the world.... View Obituary & Service Information

The family of Linda Kay Flanigan created this Life Tributes page to make it easy to share your memories.