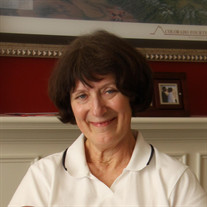 Linda Carol Goosen McLean was born on August 21, 1949, in Cole Camp, Missouri. She is the second of four children of Herb & Mary Laverne Goosen. Linda completed her senior year of high school in Richland, Missouri and followed her sister to college at Central Missouri State College in Warrensburg. That’s where she met Charlie on a blind date. She married Charles McLean September 4, 1970. They lived in Warrensburg while Linda completed her degree in secondary education. Linda worked as a secretary in the Industrial Arts school while Charlie finished his degree in Graphic Arts. Linda’s first year of teaching was in Cole Camp, where she taught typing and short-hand to several of her cousins, who were just a few years younger. When Charlie finally got his degree, they moved to Buckner, where they started a family. When the boys were old enough, Linda could not find a pre-school that she deemed adequate. So she started her own in her newly finished basement. For 7 years, Busy Bee Pre-School met the needs of several families in Buckner, many of whom became close friends. As her sons entered public school, she became a driver as both boys’ activities were seldom on the same team or at the same time. Then she became their soccer coach for several seasons. Then she became their Den Leader, and then a proud mom of 2 Eagle Scouts. Both boys left the area, got married, and started families of their own. Linda seemed to take turns moving in with each family for a while during a visit or over face time. She loved to read books to her grandchildren, whether on her lap, or over Facetime. Linda taught in public and private school settings. She went back to school and got a master’s degree in literacy in 2006. She was a librarian at a Christian school for 2 years. And, after 2 years teaching language arts in middle schools she retired for good. For many years, she taught 3 and 4-year-olds in church. She sang in the church choir for many years. She enjoyed attending the Henry Family Reunions and connecting with her cousins. Linda joined Bible Study Fellowship, BSF, in 2010 and became a BSF Children’s Program Leader in 2015. Linda loved teaching the children and wanted each child to have a relationship with Jesus. Because of Linda’s love for teaching children, in lieu of flowers, the family requests memorial giving to Bible Study Fellowship at https://www.bsfinternational.org/class/434. In line with always thinking of others, she was a cornea organ donor. She is survived by husband Charlie of the home, 2 sons Aaron McLean and wife Amy, of O'Fallon, IL, Nathan McLean and wife Taryn of Flemington, NJ, grandchildren Lucas, Mae, Ella, Graham, Reagan and brother David of Portland, Oregon. She is preceded in death by her Mother and Father, Herb & Mary Laverne Goosen, sister Joyce and brother Danny. Services were held at 2:00 p.m. Saturday, November 10, 2018 in the Memorial Chapel of Richland with Pastor Conor Scholes and Pastor Wes Wakefield officiating. The songs “Amazing Grace” and “Joyful, Joyful” were performed. Serving as escorts were Nathan McLean, Aaron McLean, Jeffery Attwood, David McLean, Chad Clark and Harold Wilson. Burial followed in the Oaklawn Cemetery of Richland. Memorial contributions may be made in memory of Linda McLean and may be left at the funeral home.

Linda Carol Goosen McLean was born on August 21, 1949, in Cole Camp, Missouri. She is the second of four children of Herb & Mary Laverne Goosen. Linda completed her senior year of high school in Richland, Missouri and followed her sister... View Obituary & Service Information

The family of Linda Carol (Goosen) McLean created this Life Tributes page to make it easy to share your memories.