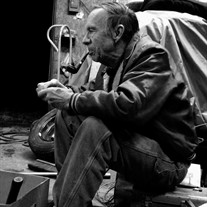 Lloyd Edward Smith was the son of the late Clarence Edward and Cora Belle (Mitchell) Smith, and was born February 6, 1937 in Sleeper, Missouri. He passed away Sunday afternoon, December 2, 2018 at his home near Stoutland, Missouri with his loving family by his side. Lloyd graduated from Stoutland High School in 1955, and began working at the International Shoe Factory which is where he met his beloved sweetheart, Ruby Catherine Pollreisz. He and Ruby married on October 29, 1955 in Camdenton, Missouri. Together they enjoyed over fifty six years together before her passing August 19, 2012. Their home was soon filled with the sounds and laughter of children, Jim, Jeanne, Connie, Tammy and Kristy. Later, Lloyd and Ruby had even more love to give as they raised their two grandchildren, Kimberlin Bradley and Robbie Schmitt as their own. Lloyd moved his family to California where he worked for Ford Motor Company approximately 3 years. The family moved back to Missouri in 1963. Lloyd then began working for the Richline Boat Factory in Richland. He also drilled wells for 2-3 years, before opening up a garage with his brother; Norman called “The Smith Brothers” in Richland. Lloyd was a fine mechanic and could fix and repair anything. He also worked 20 years as a President and CEO for Smith Brothers Longwood Furnace Company before retiring in 1999. Lloyd made a profession of faith as a young boy and was a member of Eureka Baptist Church in Richland. In his younger days, Lloyd use to fly his own airplane, a 172 Cessna. He loved spending time at the lake crappie fishing, eating homemade ice cream, spending time with his family especially his beloved grandchildren and sharing stories with them. Lloyd and Ruby also enjoyed traveling together. You could always find Lloyd at his favorite coffee shops each morning shooting the breeze with his friends, or at home puffing on his pipe, and spending time with his little dog, Charlie. Lloyd is survived by his children, Jim Smith (Mary Lyn) of Richland, MO Jeanne Richardson (Michael) of Richland, MO, Connie Ellzey (Kevin) of Waynesville, MO, Tammy Dooley (Jim) of St. Robert, MO, Kristy Taylor of Richland, MO, 16 grandchildren, Kevin and Keri Smith, Amanda Arrington, Tommie Murphy, Jessie Oursbourn, Christopher June, Stephanie Probasco, Alicia Chavez, Shayla Slawson, Robbie Schmitt, Kimberlin Bradley, Toni and Josh Dooley, Jacob, Kailey and Katie Taylor; 23 great grandchildren and one on the way; one brother, Norman Smith of Richland, MO; one sister, Edith Marshall of Seymour, MO formerly of Stoutland, MO; his sister-in-law, Ruthie Smith of Sonora, CA; nieces, nephews, other relatives and friends, and his faithful K-9 companion Charlie, who Lloyd adored. Lloyd is preceded in death by his parents, his wife, Ruby, one brother, Lee Joe Smith, his precious grandson, Benjamin Allen June and his sister-in-law, Alice Lee Smith. Lloyd just wanted to enjoy the simple things in life. He was devoted to helping provide for the needs of his family and was a wonderful son, brother, husband, father, grandfather, uncle and friend. We will forever cherish with fond memories, all of the days God gave us with him as his legacy will live on. Services were held at 2:00 p.m., Saturday, December 8, 2018 in the Memorial Chapel of Richland with Pastor Lanny Witt officiating. Lloyd’s granddaughter’s read letters from his children about their fond memories called, “Tributes to Dad.” Soloist, Chuck Summer sang “If You Only Knew,” recorded songs included, “If Heaven Wasn’t So Far Away” by Justin Moore and “Daddy Never Was the Cadillac Kind” by Confederate Railroad. Soloist, Kevin Ellzey was accompanied by pianist, Becky Lercher as he sang, “I Believe.” Escorts included, Christopher June, Jacob Taylor, Elliot June, William Longanecker, Larry Baranowski and Eric Oursbourn. Serving as honorary escorts were Robbie Schmitt, Kevin Smith, James Baranowski, Frances Barnes, Buck Hooker, Wes Ellzey, Dick Smith, Damon Purdy and Josh Dooley. Burial followed in the Beulah Cemetery near Richland, MO. Services were under the care and direction of Memorial Chapel of Richland. Memorial contributions are suggested in memory of Lloyd Smith and may be left at the Memorial Chapel of Richland. Online condolences may be left at www.memorialchapelsandcrematory.com

Lloyd Edward Smith was the son of the late Clarence Edward and Cora Belle (Mitchell) Smith, and was born February 6, 1937 in Sleeper, Missouri. He passed away Sunday afternoon, December 2, 2018 at his home near Stoutland, Missouri with his loving... View Obituary & Service Information

The family of Lloyd Edward Smith created this Life Tributes page to make it easy to share your memories.

Lloyd Edward Smith was the son of the late Clarence Edward and...