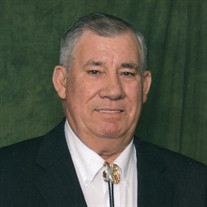 Lloyd James Zeigenbein was born on December 17, 1939 to John Zeigenbein and Della Fuller Zeigenbein at Waynesville, Missouri. Living and working on the family farm and hauling livestock to the stockyards in St. Louis, set Lloyd up for a career in trucking. In December 1958, Lloyd married Elizabeth (Betty Sue) Root and to this union six children were born: James, Paul, Janet Kay, Mary Marlene, Robert and Neil. They moved to the Pacific area when the children were small and lived in that area for over 30 years. Betty Sue was diagnosed with cancer and wanted to move home. Home was the Lebanon area where she grew up and attended school. Lloyd lovingly took care of her until her passing on November 10, 2001. Lloyd drove a truck for Be MAC until they closed down. After that he drove for SAVE-A-LOT foods until he took an early retirement to take care of his wife. Lloyd was a hardworking, honest man. He could build anything he wanted and fix nearly anything. Lloyd loved to travel and although he worked and slept the years the kids were growing up, he took his family on many vacations to a lot of different places, making a lifetime of memories. In March of 2002, Lloyd was meeting several classmates at Fuggitt Restaurant to attend the memorial service of one of his classmates’ husbands. There he saw Veda Jennings and struck up a conversation. At the funeral home, they talked some more. Soon they went out to eat and drove around talking some more. They dated for several months and married on September 26, 2003. He told everyone he went to the funeral home and brought out a live one. Lloyd was a gentle caring man. He loved to talk and never met a stranger. He loved to talk about trucking and over 30 years of driving. Veda’s brother, Gary Anderson was a truck driver with Yellow Transit and when they were together they never tired of tales from the road. He and Veda traveled to 22 states including Alaska. He always said “We’re going to go while we can because the day will come when we can’t.” Lloyd was baptized in 2006, and attended the Richland Church of Christ for several years. He loved their country home and made it very comfortable. Someone dumped a cat out at Lloyd and Veda’s house about three years ago. Lucky TOM! Lloyd bought him the best cat food MFA had to offer. He thought he could save a few bucks buying Aldi’s cat food. TOM would not eat it. Nearly every evening Lloyd would sit in the front porch swing and TOM would lay down between his feet and Lloyd would rub him with his feet. No person ever had a better neighbor than Lloyd Zeigenbein. He is survived by his loving wife Veda; four sons: James (Becky), Paul, Robert and Neil, all of Pacific. He had three stepsons: Roger (Belinda) Jennings who currently live on the family farm where Lloyd grew up, Mark Jennings of Swedeborg, and Danny (Cheryl) Jennings of Stoutland. He was the best grandpa any kid could have and loved being grandpa, he treated his step grandchildren as if they were his own, and he was proud to show it. His Grandchildren include, Amanda Matchell, Payten McFarland, McKenzie Zeigenbein, Paige Jennings, Clayton (Mallory) Jennings, Samantha (Levi) Calvert, Kristy and Justin Jennings, Mason and Garon Carroll, Jesse (Haley) Jennings, Hilary Christian, Mark II, Gunner Jennings, Kevin Jennings, and Christopher Baker. Also, a very special great grandson, Kyler Lynn Maddux. He is also survived by his brothers Alfred and Dorothy, Charles and Claudette, and Claudie. Many nieces, nephews, cousins and friends. Lloyd’s niece, Belinda Jennings looked to Lloyd like a father. Lloyd always told Veda you have to go on I’m not coming back. He passed away Thursday, February 1, 2018 in the Cox Hospital - South of Springfield, Missouri having attained the age of 78 years. In addition to his first wife, Betty Sue, Lloyd was preceded in death by his parents; grandparents: Louis and Potencia Zeigenbein and Wes and Ona Fuller; two daughters: Janet Kay Zeigenbein and Mary Marlene Zeigenbein; one sister: Lucene Zeigenbein Holloway; and two brothers: Leland and Donald Wayne Zeigenbein. Services were held at 2:30 p.m., Monday, February 5, 2018, in the Memorial Chapel of Richland with Bro. Gerald Marso officiating. Favorite music selections included, “Softly and Tenderly,” “Grandpa,” and “Go Rest High on that Mountain.” Serving as escorts were Danny Jennings, Clayton Jennings, Justin Jennings, Douglas Zeigenbein, Jeff Zeigenbein and Wayne Anderson. Burial followed in the Lebanon City Cemetery, Lebanon, Missouri. Services were under the direction of Memorial Chapel of Richland. Memorial contributions may be made in memory of Lloyd Zeigenbein to the Shiners Hospitals for Children and may be left at the Memorial Chapel of Richland... Online condolences may be left at www.richlandmemorialchapel.com

Lloyd James Zeigenbein was born on December 17, 1939 to John Zeigenbein and Della Fuller Zeigenbein at Waynesville, Missouri. Living and working on the family farm and hauling livestock to the stockyards in St. Louis, set Lloyd up for a career... View Obituary & Service Information

The family of Lloyd James Zeigenbein created this Life Tributes page to make it easy to share your memories.