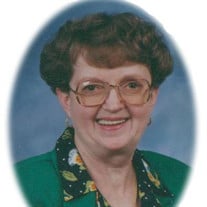 Lois Hays Adkison, born on January 29, 1936 in Alton, Missouri, departed this world for her eternal home on the afternoon of November 28, 2014 at Life Care Center in Waynesville, Missouri at the age of 78 years, 9 months, 30 days. Lois married Kenneth “Kenny” Adkison on May 31, 1968 in Waynesville and they shared over 31 years of marriage together with their children Karol and Michael, before his death in 1999. Her parents, Charles F. and Violet (Flannery) Hays and older brother, Eddie Hays preceded her in death. Upon graduation from Alton High School in 1953, Lois moved to Kansas City, where she worked for Sears, Roebuck and Company. She returned to Alton in 1959 and worked for the Oregon County Extension Office until 1966 when she began her career as a clerk typist/secretary at General Leonard Wood Army Community Hospital. She worked in several clinics before retiring in March 2000. She was a longtime, active member of First Baptist Church in Waynesville and served in many ministries there. Her love of gardening and flowers were only surpassed by her devotion to her family and her Lord and Savior. Lois leaves to cherish her memory, her daughter and son-in-law: Karol and Weldon Evans of Richland, MO; and her son and daughter-in-law: Michael and Jennifer Adkison of Ft. Lauderdale, FL; three grandchildren: Steven Bartlett, Serah Adkison and Ariel Adkison; four step grandchildren: James Frederich, William Evans, Cassandra Wilson and Lauren Smith; six step great-grandchildren: Sidney and Max Evans, Cameron and Reese Wilson, and Logan and Luke Smith; two brothers: Jim Hays of Tulsa OK and Jerry Hays and wife Linda of Burleson, TX; three sisters-in-law: Nancy Hays of Independence, MO, Lois Harris and husband Bill of Marshfield, MO and Margie Wakefield of Hartville, MO; special friend: Fred Early of Waynesville, MO; several nieces, nephews, other relatives and many friends.

Lois Hays Adkison, born on January 29, 1936 in Alton, Missouri, departed this world for her eternal home on the afternoon of November 28, 2014 at Life Care Center in Waynesville, Missouri at the age of 78 years, 9 months, 30 days. Lois... View Obituary & Service Information

The family of Lois Fern (Hays) Adkison created this Life Tributes page to make it easy to share your memories.