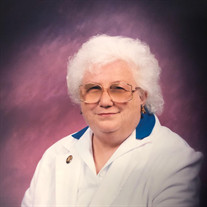 Lois Faye Breeden, one of nine children born to the union of the late Vernon Wayne and Cecil Blanche (Welch) Biram, was born November 6, 1935 in Waynesville, Missouri. She passed away Friday, November 1, 2019 in the Mercy Hospital of Lebanon, Missouri having attained the age of 83 years. As a young girl, Lois grew up in Plato and graduated from Plato High School in 1953. Shortly after graduation, she moved to St. Louis before coming back home. On August 4, 1955, Lois was united in marriage to Frank Lee Breeden. Lois and the family lived on a farm near Stoutland, Missouri where she lived for more than 30 years. She helped with milking the cows, did all the farm chores in addition to raising her children. She also owned and operated a restaurant in Stoutland for several years. She later moved to Lebanon, Missouri where she worked for Christian Healthcare for 12 years before working as a CNA for in home care. She retired after her children said she didn’t need to work anymore. In her spare time, Lois enjoyed doing puzzles and quilting. She was a great cook and always enjoyed cooking for her family and friends. She loved her family deeply and loved spending time with them. Lois will be sadly missed, but fondly remembered by all those that knew and loved her. She leaves to cherish her memory, three children, Lindell Craig Breeden (Carolyn Sue) of Bradenton, FL, Mary Ann Nelson (Doug) of Richland, MO and Danny Breeden (Beverly) of Richland, MO; seven grandchildren, twenty great-grandchildren; two brothers, Johnnie Biram of Licking, MO, and Bobby Dean Biram of Plato, MO; two sisters, Clara Tryan of Springfield, MO, and Carolyn Sue Mason of Plato, MO; Peggy Arnold Hunt, who Lois considered like a daughter: as well as a host of other relatives and friends. In addition to her parents, Lois was preceded in death by one son: Randall Lee Breeden; three brothers: Wayne, Davie and Noel Biram and one sister: Barbara Pinkston. Services were held at 11:00 a.m. Tuesday, November 5, 2019 in the Memorial Chapels and Crematory of Waynesville / St. Robert with Rev. Richard Breeden officiating. The songs “The Old Rugged Cross”, “Peace in the Valley” and “Amazing Grace” were played. Serving as escorts were Michael Breeden, Drew Thomas, Jeremy Breeden, Christ Retzloff, Scott Breeden and Rick Smallwood. Burial followed in the Crocker Memorial Park Cemetery of Crocker, Missouri. Memorial Contributions in memory of Lois Breeden may be left at the funeral home.

Lois Faye Breeden, one of nine children born to the union of the late Vernon Wayne and Cecil Blanche (Welch) Biram, was born November 6, 1935 in Waynesville, Missouri. She passed away Friday, November 1, 2019 in the Mercy Hospital of Lebanon,... View Obituary & Service Information

The family of Lois Faye Breeden created this Life Tributes page to make it easy to share your memories.

Lois Faye Breeden, one of nine children born to the union of...