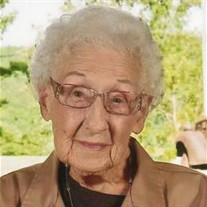 Lola Mae Nichols Lane, daughter of Robert Noah and Alice Hurl (Williams) Nichols, was born December 8, 1921, in Viola, Arkansas. She departed this life on the afternoon of August 15, 2018 in the Richland Care Center, having attained the age of 96 years. On October 25, 1943, Lola was united in marriage to Paul Andrew Lane and to this union one son was born, Larry Don Lane. At an early age, Lola professed her faith in Christ, the year being 1936. She was saved during a revival at the old Baptist Church here in Richland. One Sunday afternoon, on a cool November day, she, along with others, was baptized in the Gasconade river, out at the bridge on highway 7. At that time, she joined the First Baptist Church, where she became a lifelong, faithful member, never moving her membership. Lola spent several years in the nursery. All of the children loved her and she loved them. Lola always enjoyed everyone of them. After getting to old for nursery work, she retired from that job, and joined the Sunday school class, out in the auditorium, where she had lots of good teachers. Lola loved her church, and Sunday school very much. She remained a faithful member as long as her health permitted. After retiring from putting in several years of hard work at the Dry Cleaning Business, Lola went home to be with her husband, who had just retired from his work. But Lola’s work didn’t stop there, her alterations for customers came home with her. So a lot of my time was spent sewing for them as well as, her family. When Lola wasn’t doing that, she enjoyed taking care of her home. She also liked to do garden and yard work, as well as, cooking. Nothing made Lola happier than preparing meals for her son, Larry. Those were treasured moments to Lola. Lola loved all of her family and enjoyed spending time with them. She was a special mother, grandmother, great grandmother, aunt and friend. Lola has often stated that she’s had lots of friends, relatives, and good neighbors throughout her life; cherishing each and every one of them. Lola leaves behind to treasure her memory, her loving son, Larry Don Lane (Mary) of Richland, MO; four grandchildren, Sherry Parker of Dixon, MO, Ira Moss (Twajana), Chris Lane (Kati) and Todd Lane (Chelsea) all of Richland, MO; 11 great grandchildren, Joshua & Seth Parker, Morgan, McKenzie, Miranda & Mallory Moss, Kole, Hunter, Easton, Addi Jo Lane & Trey Lane; one niece, Wanda Fitzwater (Al) of Richland, MO; numerous other relatives and friends. Lola was preceded in death by her parents, husband, sister, Maxine Null, several aunts, uncles, and cousins. Lola’s love was immense for her beloved family, church family, friends and neighbors. She was a loving, kind, and caring woman of God. Lola will be sadly missed by her family and everyone who came to know her. But we know now that she is in Heaven, enjoying life to the fullest. Services were held Saturday, August 18, 2018 in the Memorial Chapel of Richland with Pastor Mike Hawkins officiating. Soloist and pianist, Vivian King sang, “We Shall Behold Him,” and “Amazing Grace.” Pianist, Marleen Brown played prelude and postlude music. Serving as escorts were Ira Moss, Chris Lane, Todd Lane, Joshua Parker, Seth Parker and Al Fitzwater. Honorary escorts included Tim Hardesty, Mitch Hammons and Richard Stewart. Burial followed in the Oaklawn Cemetery of Richland, Missouri. Services were under the care and direction of Memorial Chapel of Richland. Memorial contributions are suggested in memory of Lola Lane and may be left at the Memorial Chapel of Richland. Online condolences may be left at www.memorialchapelsandcrematory.com

Lola Mae Nichols Lane, daughter of Robert Noah and Alice Hurl (Williams) Nichols, was born December 8, 1921, in Viola, Arkansas. She departed this life on the afternoon of August 15, 2018 in the Richland Care Center, having attained the age... View Obituary & Service Information

The family of Lola Mae Lane created this Life Tributes page to make it easy to share your memories.