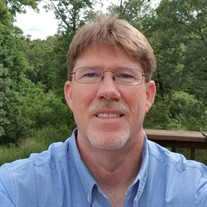 Lonnie Merrill Dean was born December 14, 1962 in House Springs, Missouri, to Lawrence Monroe Dean and Nancy Evelyn (Stonebraker) Adair. He peaceably left his home in Richland, Missouri, and went home to God Thursday, May 6, 2021, with his loving family by his side, having attained the age of 58. Lonnie grew up mostly in Buckhorn and Richland areas in Pulaski County, graduating from Richland High School in 1981. He made a profession of faith and attended Church as long as his health allowed. His love for God, his family, and friends was as immense as the ocean. After graduating, Lonnie joined the United States Army in 1982, proudly serving his country for the next twenty years. In 2002 he retired, receiving an honorable discharge for his service. During his military career, with the Army Lonnie was also awarded with the Meritorious Service Medal (2nd Award), Army Commendation Medal (4th Award), Army Good Conduct Medal (6th Award), National Defense Service Medal (2nd) Award), Armed Forces Reserve Medal, Noncommissioned Officer’s Professional Development Ribbon with Numeral 3, Army Service Ribbon, Overseas Service Ribbon, Expert Marksmanship Qualification Badge, with Grenade Bar, Sharpshooter Marksmanship Qualification Badge with Rifle Bar, Driver and Mechanic Badge with Driver-W Bar, US Army Gold Recruiter Badge, Noncommissioned Officer Training Session, 1 Week, 1998, Transition Noncommissioned Officers CRS, 2 Weeks, 1997, Recruit Quota System Basic Operation Procedures, 1 Week, 1997, Retention Noncommissioned Officer Basic CRS, 2 Weeks, 1987. Lonnie also served as commander for the color Guard in the opening ceremony of the 50th anniversary of D-Day in Utah Beach Normandy, France in 1994. A quote Lonnie posted once read, I served…A Soldier for Life. He not only served his country, but Lonnie also served wherever there was a need…community, church, family, or a friend in need. He had a servant’s heart.; and even became a Boy Scout Leader, which he greatly enjoyed. On October 15, 1983, Lonnie married Joellyn Rae Homan in Richland, Missouri, soon God blessed the happy couple with three wonderful sons who brought even more joy and love into their home. Lonnie received his master’s degree in business and accounting while in the military, putting his education to good use, later opening his own business, Tax Pros and More, serving St. Robert, Richland, and Lebanon areas. In Lonnie’s younger days he was selected by the National Junior Bowlers league however, due to circumstances beyond his control, could not follow through with his dream. He loved life and being outdoors. Prior to his illness, Lonnie was an avid runner and enthusiastically ran several half marathons, and community fun runs. He spent much of his time chasing and capturing sunsets, sharing them on social media. Lonnie was also a big supporter of Spirit FM. He is preceded in death by his parents, Lawrence Monroe Dean, and Nancy (Stonebraker) Adair, half-brother, Lawrence “Big Larry” Dean and brother Lester Dean. Lonnie leaves behind to cherish his memory, his loving wife, Joellyn of the home; three sons: Sam Dean of Licking, MO, Andy Dean of Crocker, MO, and Tim Dean of Richland, MO; two brothers: Lloyd Dean (Theresa) of Wichita, KS, and Larry Dean (Blanche) of Bracey, VA; two sisters: Carol Baranowsky (Rich) of St. Louis, MO, and Terri Evans of St. Louis, MO; father and mother-in-law, Junior and Barb Homan of Richland, MO; brother and sister-laws, Rich and Dee Ann Homan of Richland, MO, and Jonathan and Angie Homan of Lebanon, MO; several nieces, nephews, and other relatives and friends. Services were held at 12:00 Noon, Tuesday, May 11, 2021, in the Memorial Chapel of Richland with Bob Leinbaugh officiating. Favorite music selections played were, “I Can Only Imagine,” “Even If,” and “Sail On.” Serving as escorts were Lloyd Dean, Larry Dean, Rich Homan, Jonathan Homan, Dan Dean, and Kevin Emmert. Burial with full military honors followed in the Missouri Veterans Cemetery, Waynesville, Missouri. Services were under the care and direction of Memorial Chapel of Richland. Memorial contributions may be made in memory of MSG (Ret) Lonnie Merrill Dean and may be left at the Memorial Chapel of Richland. Online condolences may be sent to www.memorialchapelsandcrematory.com

The family of MSG (Ret) Lonnie Merrill Dean created this Life Tributes page to make it easy to share your memories.