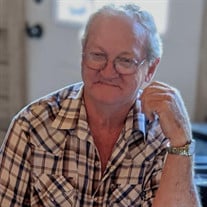 Lonnie Isaac Rodden, son of the late Gilbert and Roma Della (Jeffries) Rodden, was born December 28, 1948, in Brumley, Missouri. He left this world behind and entered into the presence of His Lord on November 25, 2020, while in the Lake Regional Hospital of Osage Beach, Missouri, having attained the age of 71 years, 10 months, and 28 days. In addition to his parents, Lonnie was preceded in death by three brothers: Russell, Phillip, and Darrell; three sisters: Rita, Patsy, & Sue (Bert) and brother-in-law: Fred; and his father and mother-in-law, Ernest and Violet (Wilson) Oursbourn. Lonnie grew up in Miller and Camden Counties, where he attended school. He was united in marriage to Cheryl Jean Oursbourn, who he lovingly referred to as “Sug” on May 25, 1966 in Camdenton, Missouri. God blessed them with two beautiful daughters, Leslie, and Lisa. Lonnie was proud of his family and the home he’d built for them many years ago. In 1967 Lonnie began working for the old Richline Boat Manufacturing Company in Richland and later began his career with Playcraft, where he was considered to be a respected and valued employee for over fifty-three years. If you knew Lonnie, you knew he was a hardworking man, with an outstanding work ethic, and took great pride in whatever job he was given. Lonnie always gave a hundred percent to any task he’d start. In his younger days, Lonnie enjoyed hot-rodding around in his car, long horseback rides, often riding to his parent’s farm in Brumley. He was an outdoorsman, and during the summer could be found mowing his yard, the yards of his family, or the Rodden family cemetery. He loved driving his truck to Brumley each weekend, there he tended to the land he’d grown up on, and especially enjoyed hunting, planting garden, or food plots, mowing, riding his side-by-side, or 4-wheeler, and occasionally Lonnie would stay overnight in his little cabin he’d built. “Lonzo” was an avid hunter and patiently taught family members to hunt as each became of age. Lonnie would burst with pride when one of them would kill a deer and couldn’t wait to spread the news when he got back home to anyone who’d listen. He treasured spending time with his family and friends and enjoyed BBQ’s. He loved a good hamburger smothered in Country Bob’s, meatloaf, wilted lettuce, and peach cobbler were among his favorite things Sug would lovingly cook for him. If they went out to eat, you could soon hear him say, “Well, this wasn’t as good as Sug’s.” Lonnie made a profession of faith and followed in baptism while attending Beulah Baptist Church. He later moved his membership to Grace Baptist Church where he humbly served as a valued Trustee, and gladly served wherever there was a need. He was talented and artistic and created many wonderful things for Grace. Lonnie loved to sing and praise His Lord in song and his church family always looked forward to his specials. He occasionally got to sing for the folks in the nursing home which brought them great joy. He loved going to area singings on occasion and especially liked old style country music. Hank Williams was his favorite singer. Lonnie was a loving and devoted son, brother, husband, father, grandfather, uncle, and friend. He would do anything for anybody if he could. He will be sadly missed and leaves behind to cherish his memory his loving wife, Cheryl of over fifty-four years, two daughters, Leslie Roark (Jeff), and Lisa Patton (Jason) all of Richland, MO; four grandchildren, Henry Lee “Corky” Rairden (Loretta Rhodes), Angela Harmon, Wyatt Patton (Brooke), and Kaitlynn Patton all of Richland, MO; six great-grandchildren: Breona, Jeramy, and Jackie Rose Rairden, Ashton and Emily Dorrance, and Lily Tester; three sisters: Thelma Shields (Larry) of Lake Ozark, MO, Carol Matsch of Lebanon, MO, Janie Messner (John); brothers-in-laws: Vic Oursbourn (Lucille Allen) of Laquey, MO and Barry Oursbourn (Cheryl) of Stoutland, MO; several nieces, nephews, as well as, a host of other relatives and friends. Lonnie would want you to know one more important thing and it is this…those who have accepted Christ as their personal Savior, like he had done, know that to be absent from the body is to be present with the Lord. Lonnie is with God. One day each of us will begin our journey home just as Lonnie did, and he would ask that you be ready because no one knows when God will call you home. So, grieve if you must…but only for a little while because Lonnie is happy with his Lord and is experiencing unspeakable joy. So, until then… as Lonnie would say, See ya later gator! Services were held at 2:00 p.m. Sunday, November 29, 2020, in the Memorial Chapel of Richland with Pastor Billy Williams officiating. Soloist, Chuck Summers sang, “If You Only Knew.” Lonnie’s favorite Country music artist, Hank Williams’s songs, “I Saw the Light” and “I’ll Fly Away” were played. Wyatt Patton, John Messner, Bryan and Bret Schaffner, Barry and Adam Oursbourn, and Doug Scott served as escorts. Honorary escorts included Henry Lee “Corky” Rairden, Ashton Dorrance, Jeramy Rairden, Bob Bonsall, Roy Alexander, Jason Patton, Jeff Roark, and Vic Oursbourn. Lonnie was laid to rest in the Rodden Family Cemetery, Brumley, Missouri. Services were under the care and direction of Memorial Chapel of Richland. Memorial contributions may be made in memory of Lonnie Isaac Rodden and can be left at the Memorial Chapel of Richland funeral home.

Lonnie Isaac Rodden, son of the late Gilbert and Roma Della (Jeffries) Rodden, was born December 28, 1948, in Brumley, Missouri. He left this world behind and entered into the presence of His Lord on November 25, 2020, while in the Lake Regional... View Obituary & Service Information

The family of Lonnie Isaac Rodden created this Life Tributes page to make it easy to share your memories.