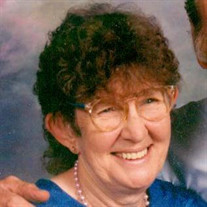 Loretta Mae York, daughter of the late Thomas and Elsie (Emory) Barnett, was born January 25, 1943 in Dixon, Missouri. As a young girl, Loretta moved to Crocker where she grew up and attended school. On February 5, 1969 in Waynesville, Loretta was united in marriage with Junior “Rex” York. They shared over 30 years of marriage and many wonderful memories together before he preceded her in death on May 16, 1999. Loretta and Rex lived in Waynesville where they raised their two children together: Julie and Johnny. Loretta was a hardworking woman. She worked for Mac’s Cleaners for a time before working at Rice’s Cleaners where she remained until her retirement. She retired in order to take care of her mother and babysit her grandson, Kenneth. In her spare time, Loretta enjoyed going to church, especially attending Mary Martha Circle meetings at First Christian Church of which she was a long time member. She also liked to go to lunch with friends, sewing and spoiling her grandson. Loretta went home to be with her Lord Wednesday March 1, 2017 in the Life Care Center of Waynesville, Missouri having attained the age of 74 years. She will be sadly missed, but fondly remembered by all those that knew and loved her. Loretta leaves to cherish her memory, two children: Julie Bowen (Kenny) of St. Robert, MO and Johnny York (April) of St. Robert, MO; one brother: Dickie Emory (Cindy) of Waynesville, MO; four grandchildren; Kenneth Bowen, Courtney Spurgeon, Gracie York and Caleb Tyre; one great-grandchild: Kaidan Spurgeon; other relatives and friends. In addition to her parents and husband, Loretta was preceded in death by three brothers: Billy, Jimmy and Ronnie Barnett. Services were held at 1:00 p.m. Wednesday, March 8, 2017 in the Memorial Chapels and Crematory of Waynesville / St. Robert with Rev. Danny Graves officiating. The song “Beautiful Jerusalem” by the Stanley Jones Singers was played and soloist Becky Lercher sang “Amazing Grace” and “Beulah Land”. Serving as escorts were John Bowen, Rodney Rickerson, Billy Barnett, Chris Trevarrow, DJ Halverson and Tony Rickerson. Serving as honorary escort was Marty Trevarrow. Burial followed in the Sunset Memorial Estates Cemetery of Waynesville. Memorial contributions may be made in memory of Loretta York and may be left at the funeral home.

Loretta Mae York, daughter of the late Thomas and Elsie (Emory) Barnett, was born January 25, 1943 in Dixon, Missouri. As a young girl, Loretta moved to Crocker where she grew up and attended school. On February 5, 1969 in Waynesville,... View Obituary & Service Information

The family of Loretta Mae (Barnett) York created this Life Tributes page to make it easy to share your memories.