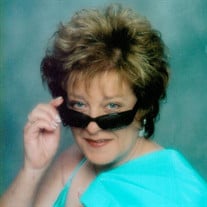 Devoted wife, mother and grandmother, Lorie Nan Baptiste, passed away Thursday, August 10, 2017 having attained the age of fifty-seven years. She was born November 22, 1959 in El Paso, Texas to the union of the late James and Marla Dean (Lapp) Kroeger. As a young child, Lorie was raised in the Catholic faith. Lorie spent most of her childhood in El Paso. Due to her father being in the military, Lorie and the family were stationed in different places (Germany, St. Louis, etc.) and were transferred to the Fort Leonard Wood area where she graduated from Waynesville High School in 1979. Lorie was united in marriage to Richard T. Baptiste on August 4, 1979 in the Main Post Chapel of Fort Leonard Wood, Missouri. They shared over thirty-eight years of marriage together and were blessed with two children: Richard Jr. and April. Lorie was a hard worker and earned her CNA license. She worked for several years at Sunset Village of the Ozarks. She was a very caring person and loved taking care of the residents. Most of her life was spent caring for her family. She enjoyed working in her yard and maintaining her home and in her spare time, she was a very good seamstress and liked to do handwork. She loved her animals, especially her dogs and cats. But most importantly, she loved her family and treasured the times that she could spend with them and also her best friend who is like an adopted sister, Anna Bergeron. Lorie will be deeply missed, but fondly remembered by all those that knew and loved her. She leaves to cherish her memory, her husband: Richard Baptiste of the home; two children: Richard Baptiste, Jr and wife Niki of Springfield, MO and April Lyn Robertson and husband Shawn of Manhattan, Kansas; four grandchildren: Emma Grace and Abigail Robertson, and Grayson and Oliver Baptiste; two siblings: Alan Dool of St. Robert, MO and Danny Dool and wife Sheila of Republic, MO; three nieces: Sondra Ballenger, Megan Dool-O’Brien and Alexandria Dool; two nephews: Dillon Dool and Kyle Johnson; mother-in-law: Mieko Baptiste of Waynesville, MO; two sisters-in-law: Caroline Johnson and Ame Baptiste; several other relatives and friends. In addition to her parents, Lorie was preceded in death by her father-in-law: Melvin Baptiste and sister-in-law: Sylvia Baptiste. Services were held at 2:00 p.m. Monday, August 14, 2017 in the Memorial Chapels and Crematory of Waynesville / St. Robert with Pastor Russell Johnson officiating. Lorie’s son, Richard Jr., sang “Ave Maria”. Several family members and friends recalled their wonderful memories of Lorie. Memorial contributions may be made in memory of Lorie Baptiste and may be left at the funeral home.

Devoted wife, mother and grandmother, Lorie Nan Baptiste, passed away Thursday, August 10, 2017 having attained the age of fifty-seven years. She was born November 22, 1959 in El Paso, Texas to the union of the late James and Marla Dean (Lapp)... View Obituary & Service Information

The family of Lorie Nan Baptiste created this Life Tributes page to make it easy to share your memories.