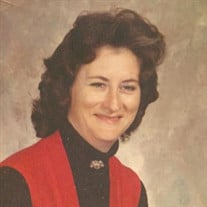 Lottie Lee Gibson, daughter of the late Basil Duke and Clara (Thomson) Talbot, was born July 27, 1937 in Wildwood, Missouri. As a young girl, Lottie grew up in Texas and later went to school in St. Louis, Missouri and Laquey, Missouri. After leaving school, Lottie went back to Texas and worked for the News Company for six years. She later moved to Kansas where she worked for the American Legion and eventually came back to Missouri in the 1990’s. On November 8, 1998, Lottie was united in marriage to Billy Joe Gibson in Laquey, Missouri. They shared several wonderful years of marriage together before he preceded her in death in 2008. In her spare time, Lottie enjoyed being outdoors while fishing and also liked to play cards and put puzzles together. Most importantly, she loved spending time with her friends and family. Lottie made a profession of faith and was a member of the Idumea Baptist Church of Laquey, Missouri. Lottie went home to be with her Lord Tuesday, December 2, 2014 in her home having attained the age of 77 years, 4 months and 5 days. She will be sadly missed by all those that knew and loved her. Lottie leaves to cherish her memory, her son Doug Cox of Berger, MO; two step-children: Tracy Gibson of Richland MO and Penny Gibson of St. Robert, MO; six sisters: Mona Jackson of Big Piney, MO, Esther Yount of Laquey, MO, Julie Ray of Laquey, MO, Gwendolyn Jane Bolte of Pittsburg, KS, Patricia Frazier of Eldridge MO and Liz Tipton of Eufalla, OK; and a host of grandchildren and great grandchildren. In addition to her parents and husband, Lottie was preceded in death by one son: Basil Cox; one sister: Virginia Hutcherson; two brothers: Basil and Charles Talbot; and one step-daughter: Rotha Renee Gibson. Services were held at 11:00 a.m. Friday, December 5, 2014 in the Memorial Chapels and Crematory of Waynesville / St. Robert with Rev. Danny Graves officiating. The songs “Take My Hand, Precious Lord”, “Precious Memories” and “Someday My Time Will Come” were played. Memorial contributions may be made in memory of Lottie Lee Gibson to the Idumea Cemetery Fund and may be left at the funeral home.

The family of Lottie Lee Gibson created this Life Tributes page to make it easy to share your memories.