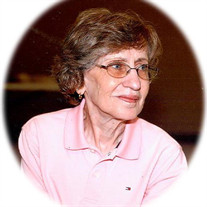 Ruth Lucille Kelley, daughter of the late Sherman Woodrow and Mary Elen (Marcum) Lowery, was born September 29, 1945 in Grovespring, Missouri. She went home to be with her Lord Sunday, May 7, 2017 having attained the age of 71 years. As a young girl, Lucille (as she was known by her family and friends) attended school in Lebanon, Missouri. She met the love of her life in a young man by the name of Kenneth “Dale” Kelley, Jr. After Dale joined the U.S. Navy they were united in marriage on April 1, 1961. They were relocated to Key West, Florida. After Dale was honorably discharged from the Navy in 1963, Lucille and their family moved back to Waynesville. Lucille and Dale were blessed with two children: Jack and Tammy. Lucille, Dale and the children remained in the Waynesville area. After fifty years of marriage, Dale passed away on August 8, 2011. Lucille was a devoted homemaker, loyal wife and loved caring for her family. She was known for her quick-witted comebacks and sense of humor. She also loved children and served the community as a child care provider for 32 years to many families in the community. In her spare time, Lucille loved to watch birds, especially hummingbirds and cardinals. She always maintained a well-kept yard and enjoyed the natural beauty of the Ozarks. Most importantly, she had a strong faith and loved her family deeply. She will be sadly missed, but fondly remembered by all those that knew and loved her. She leaves to cherish her memory, her son: Jack D. Kelley (Michelle) of Richland, MO; daughter: Tammy Rice (Rob) of Waynesville, MO; two grandchildren: Ryan Kelley of Waynesville, MO and Megan Franklin (Caleb) of Havelock, NC; three grandchildren: Ryder Kelley, and Minnie and Addie Franklin; one sister: Annabelle Lewis of Lebanon, MO; numerous nieces and nephews; other relatives and friends. Even though she is gone from our sight, she will live on in our hearts forever. Services were held at 11:30 a.m. Wednesday, May 10, 2017 in the Memorial Chapels and Crematory of Waynesville / St. Robert with Rev. Gary Sheets officiating. Charlie Kelley, brother-in-law to Lucille, recalled his wonderful memories of her and also led the congregation in prayer. The songs “Peace in the Valley” by Elvis Presley and “I Can Only Imagine” by Mercy Me were played. Serving as escorts were Eugene Berry, Jake Hale, Calab Franklin, Jace Hale, John Sandusky and John Berry. Serving as honorary escorts were Steve Kelsey, Bob Woody and Andy Smith. Burial followed in the Missouri Veteran’s Cemetery of Waynesville. Memorial contributions may be made in memory of Lucille Kelley and may be left at the funeral home.

Ruth Lucille Kelley, daughter of the late Sherman Woodrow and Mary Elen (Marcum) Lowery, was born September 29, 1945 in Grovespring, Missouri. She went home to be with her Lord Sunday, May 7, 2017 having attained the age of 71 years. As... View Obituary & Service Information

The family of Lucille Kelley created this Life Tributes page to make it easy to share your memories.

Ruth Lucille Kelley, daughter of the late Sherman Woodrow and...