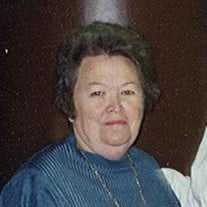 Lucille Lorraine Tallant, daughter of the late William Hugh and Grace (Campell) Langell, was born October 15, 1932 in Yakima, Washington. On February 3, 1951, Lucille was united in marriage to Leasle Carnez Tallant in Yakima, Washington. They shared over 64 years of marriage together and were blessed with four children: Alden, Cynthia, Brian and Adam. In 1953, Lucille and Leasle moved to Licking, Missouri, then to Potosi, Missouri, and in 1960 moved to Salem, Missouri. In 1961, the family moved to Waynesville and has been residents here since that time. Lucille worked as a beautician, but most of the time she was able to be a stay at home mom raising her children. After her grandchildren started coming along, she was a full time “Granny”. Lucille enjoyed being outdoors with the animals and watching birds. She loved to quilt and several family members have quilts that she made. Her biggest joy was getting together with her family at big family gatherings. She loved her home and especially enjoyed watching her grandchildren. At an early age, Lucille made a profession of faith and was baptized. She was a long time member of the Hickory Hills Baptist Church of St. Robert. Lucille went home to be with her Lord Friday, June 12, 2015 in the Life Care Center of Waynesville having attained the age of 82 years. She will be sadly missed, but fondly remembered by all those that knew and loved her. Lucille leaves to cherish her memory her husband: Leasle Tallant of their home; four children: Alden W. Tallant of Stoutland, MO, Cynthia R. West (Donley) of Waynesville, MO, Brian L. Tallant (Kathy) of Newburg, MO and Adam K. Tallant (Nancy) of Waynesville, MO; ten grandchildren: Alicia Tallant, Chris Tallant, Jason Woodring, Jessie Woodring, Brian West, Crystal West, Luke Tallant, Scott Tallant, Kyle Tallant and Jake Tallant; eleven great grandchildren; one sister: Iola Craig (Harold) of Eugene, OR; numerous nieces, nephews, other relatives and friends. In addition to her parents,Lucille was preceded in death by four siblings: Gordon Scott, Les Scott, Bill Langell and Louise Guthrie; and one great grandson: Cole W. Tallant.

The family of Lucille Lorraine Tallant created this Life Tributes page to make it easy to share your memories.

Lucille Lorraine Tallant, daughter of the late William Hugh and...