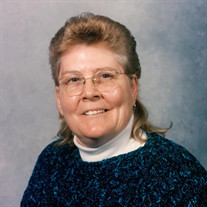 Mabel Lee Jones, daughter of the late Howard Ivan Jones and Bonnie Ernestine (Watts) Jones Luebken, was born June 10, 1949 in Richland, Missouri. She passed away Sunday, November 29, 2015 in her home after a brave and courageous battle with cancer having attained the age of 66 years. Mabel grew up in the Richland area and graduated from Richland High School in 1967. After graduation, Mabel moved to South Carolina to be with her brother and in 1972, she came back to Missouri and settle in St. Robert, Missouri. For 20 years, Mabel drove a taxi cab for the Yellow City Cab Company and then in 1986 opened up Jones Investigation and Check Point which she owned and operated until 2014. As a young girl, Mabel was baptized at the First Baptist Church of Richland. In her spare time, Mabel loved to travel and especially liked to go to casinos. She was an avid golfer and took every chance she could to go to the local golf course. Most importantly, she loved her family and friends, and enjoyed spending time with them as much as possible. Mabel will be sadly missed, but fondly remembered by all those that knew and loved her. She leaves to cherish her memory her companion: Cindy English of the home; one brother: Fred Jones of Crocker, MO; one sister: Sandy Robinson of Laquey, MO; nieces and nephews: Carroll “Buzz” Hendrix, Sherry McNulty, Darrell Shelton, Tina Marie Williams and Jennifer Jones and many other nieces, nephews, great nieces, great nephews, other relatives and friends. In addition to her parents, Mabel was preceded in death by two sisters: Marilyn Sue Brand and Beverly Jean Jones and stepfather: Virgil Luebken. Funeral services were held at 12:00 p.m. Thursday, December 3, 2015 in the Memorial Chapels and Crematory of Waynesville / St. Robert with Mabel’s nephew, Darrell Ivan Shelton officiating. The songs “Serenaded By Angels” and “How Great Thou Art” were sung by Becky Lercher and “Like I’m Gonna Lose You” by Meghan Trainor was played. Serving as escorts were Christopher Hendrix, Buzz Hendrix, Mark Carr, Kevin Viox, Greg Warren, Josh Shelton, Jeremy Jones and Brandon Connell. Burial followed in the Buckhorn Cemetery of Waynesville. Memorial contributions may be made in memory of Mabel Lee Jones and may be left at the funeral home.

Mabel Lee Jones, daughter of the late Howard Ivan Jones and Bonnie Ernestine (Watts) Jones Luebken, was born June 10, 1949 in Richland, Missouri. She passed away Sunday, November 29, 2015 in her home after a brave and courageous battle with... View Obituary & Service Information

The family of Mabel Lee Jones created this Life Tributes page to make it easy to share your memories.