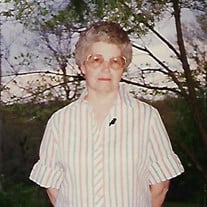 Mable Joyce Brown, daughter of Charley Worth and Tilda Evelyn (Harmon) Scott was born in rural Camden County, Missouri on May 19, 1933, where she grew up and went to school. Joyce became a member of Beulah Baptist Church on May 13, 1973 and was later baptized by Rev. Harvey Dye on July 15, 1973. Joyce and Earnest later attended Swedeborg Baptist Church as long as their health permitted. Joyce was married to Frank “Glen” Green until his passing in 1993. Unbeknownst to Joyce God would later gift her with a warm and caring man, Earnest M. Brown. The couple enjoyed one another’s company and were later married on August 8, 1995 in Richland, Missouri, where they made their loving home for the next 24 years together. Throughout Joyce’s life she loved God’s little animals, fishing, quilting, sewing, and listening to Blue Grass Gospel. She was preceded in death by her parents, first husband, Glen, three brothers: Charlie, Buddy and Robert; four sisters: Elizabeth, Cindy, Florence and Maggie. On the morning of Saturday, December 7, 2019, Joyce went home to live with the Lord having attained the age of eighty six years, and leaves behind to cherish her memory her loving husband, Earnest Brown of the home, one stepson, Richard Brown and his wife, Patricia of Potosi, MO; her step grandchildren and great grandchildren; numerous nieces, nephews and a host of other relatives and friends. Joyce will be remembered for her gentle sweet spirit, her witty sense of humor...even though a bit shy, she always enjoyed a chuckle or two. Joyce had endured health issues throughout her life, yet she did so without complaining, she always tried to live out each day to its fullest with the help and daily encouragement of her devoted husband, whom she loved deeply, as well as, other special people in her life. Joyce touched the lives of many and will forever be missed by those who knew and loved her. Services were held at 11:00 a.m., Wednesday, December 11, 2019, in the Memorial Chapel of Richland with Pastor’s Billy Williams and Mark Tallant officiating. A favorite Blue Grass song, “I’ll Fly Away” was played and soloist/pianist Becky Lercher sang “In the Garden.” Escorts included, Jimmy Smith, Bo Sumner, Earl Brown, Greg Black, Frank Kettinger, Gary Baranowski, Richard Scott, James Baranowski and Joy Smith. Burial followed in the Beulah Cemetery near Richland, Missouri. Services were under the care and direction of Memorial Chapel of Richland. Memorial contributions may be made in memory of Joyce Brown and may be left at Memorial Chapel of Richland.

Mable Joyce Brown, daughter of Charley Worth and Tilda Evelyn (Harmon) Scott was born in rural Camden County, Missouri on May 19, 1933, where she grew up and went to school. Joyce became a member of Beulah Baptist Church on May 13, 1973 and... View Obituary & Service Information

The family of Mable "Joyce" Brown created this Life Tributes page to make it easy to share your memories.

Mable Joyce Brown, daughter of Charley Worth and Tilda Evelyn...