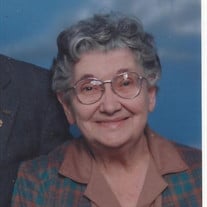 Mable Marie Davis, daughter of Clyde Evert and Beatrice (Long) Miller, was born July 19, 1927, near Brumley, Missouri. She departed this life October 15, 2020, in Mercy Hospital at Lebanon, Missouri, at the age of ninety-three years, two months and twenty-six days. On May 31, 1952, in Iberia, Missouri, Mable was united in marriage to Marvin Milton Davis, and they shared sixty-six years together. They were blessed with four children: Mildred, Maxine, Clyde and Margie. She grew up in the Iberia/Brumley area and graduated from Iberia High School. She became a Teacher, and taught in Iberia, in Rabbit Head one room school. In later years she taught in the Plato and Success schools. In earlier years she worked at Fort Leonard Wood in the Finance Department. This is where she met Marvin, passing out paychecks. After they were married, they purchased a small farm in 1955 in Iberia. Marvin was called into the ministry and they made their home in various communities where they served the church. The last church Marvin pastored was Hopewell Baptist Church at Big Piney. They were there for 34 years. Mable is still a member there. Her family was very important to her. She dearly enjoyed spending time with them and caring for them. She loved taking walks and being outdoors. Mable leaves to cherish her memory her four children, Mildred Stout of Falcon, MO, Maxine Hall of Edgar Springs, MO, Clyde Davis of Waynesville, MO, and Margie Holder (John) of Bentonville, Arkansas; six grandchildren, Stephen “Gene” Stout of Lebanon, MO, Deena Stout of Falcon, MO, Michelle Foell (Bill) of Lebanon, MO, Sarah Davis of Jefferson City, MO, Nicole Holder of Bentonville, AR, and Joshua Holder (Erin) of Rogers, AR; four great-grandchildren, Morgan Daniel (Dakota), Tyler Foell, Emilia Holder and Olivia Holder; one great-great-grandchild, Daxton Daniel; as well as a host of other relatives and friends. In addition to her parents, Mable was preceded in death by her husband Marvin, two sons-in-law, Stephen Stout and Wesley Hall. We celebrate her life and will cherish the many happy memories that she created. Services were held at 1:00 p.m. Monday, October 19, 2020 in the Mt. Carney Christian Church of Falcon, Missouri with Rev. Phillip McGuire officiating. Joshua & Nicole Holder played “It Is Well With My Soul” on the violin and guitar. Serving as escorts were John Holder, Gene Stout, Bill Foell, Joshua Holder, Dakota Daniel and Tyler Foell. Burial followed in the Mt. Carney Cemetery of Falcon, Missouri. Services were under the direction of Memorial Chapels and Crematory of Waynesville / St. Robert. Memorial Contributions in memory of Mable Davis may be left at the funeral home.

The family of Mable Marie Davis created this Life Tributes page to make it easy to share your memories.