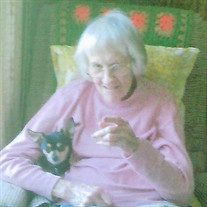 Macy Mae Moats, daughter of the late Warner D. and Delpha (Kasting) Byerly, was born October 19, 1925 in Rock Bridge, Missouri. She passed away Saturday, October 5, 2019 in the Life Care Center of Waynesville having attained the age of 93 years. As a young girl, Macy grew up and attended school in Rock Bridge. She later moved to Wichita, Kansas where she worked at an airplane factory during WWII and then moved to Springfield, Missouri where she began working at an egg plant. While living in Springfield, Macy met a young man by the name of Clarence Amby Moats. They were united in marriage on May 3, 1946 and shared over 68 years of marriage together before he preceded her in death on October 22, 2014. Macy and Clarence were blessed with two sons: Don and Jerry. Macy, Clarence and the family lived in Mtn. Grove, Missouri before moving to West Virginia for a time. In 1958, they made their way back to Missouri where they settled in St. Robert, Missouri. Clarence and Macy opened Moats Body Shop in 1958 and they ran the auto repair business for many years along with their two sons. In her spare time, Macy enjoyed doing needlework, especially crocheting. Most importantly, she loved spending time with her friends and family, especially the grandchildren. Macy will be sadly missed, but fondly remembered by all those who knew and loved her. She leaves to cherish her memory, two sons: Don Moats and his wife, Penny of Dixon, MO and Jerry Moats and his wife, Valerie of Punta Gorda, FL; five grandchildren; five great grandchildren; one great-great grandchild; other relatives and friends. In addition to her parents and husband, Macy was preceded in death by one brother: Elmo Byerly. Services will be held at 11:00 a.m. Wednesday, October 9, 2019 in the Memorial Chapels and Crematory of Waynesville with Rev. Richard Breeden officiating. The song “Amazing Grace” was played. Serving as escorts were family and friends. Burial followed in the Lily Ridge Cemetery of Gainesville, Missouri.

Macy Mae Moats, daughter of the late Warner D. and Delpha (Kasting) Byerly, was born October 19, 1925 in Rock Bridge, Missouri. She passed away Saturday, October 5, 2019 in the Life Care Center of Waynesville having attained the age of 93 years.... View Obituary & Service Information

The family of Macy Mae Moats created this Life Tributes page to make it easy to share your memories.