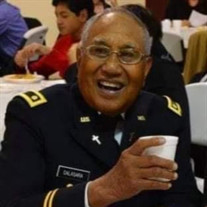 MAJ (Ret) Father James T. Calasara was born July 6, 1934 as Mansueto Tumaliuan Calasara in Tigbauan Iloilo, Philippines to Mansueto Tidula Calasara, Sr. and Concepcion Tumaliuan Tortula. Father James attended Tigbauan Elementary School and graduated in 1949. He then further his education at Tigbauan High School for one year before heading straight to Vincent Seminary until he finished his priesthood. He was ordained on March 19, 1961. His first assignment was in Janiuaway, Iloilo parish for two years and then to Pototan, Iloilo, for two years. He also served in another province in Buenavista, Guimaras for two years. He then joined and got Commissioned in the Philippine Marines as a chaplain then he transferred to Philippine Navy as a chaplain. He was one of the seven chaplains who served under late President Marcos’ regime. He left Philippine Navy and moved to Agana, Guam. He worked in Guam as a Diocesan Priest. On May 18, 1981 he was appointed as a Reserved Commissioned Officer of the US Army as a chaplain (1LT). He was activated on June 9, 1981 until his retirement on July 31, 1996 with the rank of Major. During Iraq war, he was recalled to active duty for three more years from November 1, 2002 to October 31, 2005. During his time in the military, he earned the following awards and commendations: Parachustist Badge, Army Commendation Medal (3rd Award) National Defense Service Medal (2nd Award), Korea Defense Service Medal, Armed Forces Expeditionary Medal, Army Service Ribbon, Overseas Service Ribbon (3rd Award), and the Global War on Terrorism Service Medal. After his second retirement from the US Army, he volunteered as a priest in a local and neighboring community parishes. At the same time, he enjoyed going back to his usual routine as a traveling golfer, going to Pilgrimage, and instructing at his own driving range in Dixon - El Padre Golf and Country Club. He was a professional golf instructor and a member of the United States Golf Teacher’s Federation. In November 2003, he played in the Golf Teacher’s Cup. He was also writing books and published the following: Who Founded Your Church, The Holy Gospel in Poetry (Christianity in Poetry), The Fighting Priest, Jokes for everyone, and the Holy Land Memories of a Pilgrim. He was also a linguist and spoke 8 languages. In his last few years, Father James was admitted in the Missouri Veteran’s Home in Cape Girardeau and his last two weeks, he spent his days at the St. Francis Medical Center in Cape Girardeau. On Wednesday, July 28, 2021, Father James endered into his eternal rest in the St. Francis Medical Center of Cape Girardeau, Missouri having attained the age of 87 years. Father James leaves behind to cherish his memory, one brother: Manuel Calasara; three sisters: Luisa Calasara, Josefa Calasara Fantillo, Isabel Calasara Fernandez; friend: Gloria and Dionisio Darang; several other relatives and friends. He was preceded in death by his parents: Mansueto Tidula Calasara, Sr. and Concepcion Tumaliuan Tortula; and three brothers: Felixberto, Remegio, and Antipas Calasara. Father James lived his life to the fullest, traveling around the world, golfing, lawn tennis, going to friend’s house parties and going to Pilgrimage. We will surely miss our fighting priest. He served as a priest, soldier, mentor, and a good friend……until we all meet again El Padre. Thank you for all the memories. We all love you! Mass of Christian Burial will be held at 11:00 a.m. Tuesday, August 10, 2021, in the Soldiers Memorial Chapel of Fort Leonard Wood, MO. Burial with military honors will follow in the Missouri Veterans Cemetery of Waynesville, MO. Arrangements are under the direction of Memorial Chapels and Crematory of Waynesville / St. Robert. Visitation will be held from 5:00 -8:00 p.m. Monday, August 9, 2021, in the Soldiers Memorial Chapel of Fort Leonard Wood, MO. Memorial contributions may be made in memory of Father Calasara and may be left at Memorial Chapels and Crematory of Waynesville / St. Robert.

The family of MAJ (Ret) Mansueto Tumaliuan Calasara created this Life Tributes page to make it easy to share your memories.