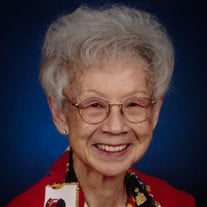 Margaret Sumie (Kaya) Ripley, daughter of the late Tokuzo and Misao (Kato) Kaya, was born October 12, 1922 in Wailuku, Maui, Hawaii. During World War II, Margaret worked for the U.S. Navy at Pearl Harbor, she transferred to Kwajalein Atoll and then to the island of Guam where she worked as a supply specialist. In 1946, Margaret met Staff Sergeant Donald E. Ripley on a blind date and it was love at first sight. After several administrative delays to get permission to get married from General MacArthur in Japan, they were married on November 6, 1948. The last military governor of Guam, a rear admiral in the Navy, married them. Don was the first Army service member to be married in Guam. Margaret became a military wife who supported and accompanied her husband throughout their military career. Margaret gave her life to Christ at a young age in the First Baptist Church in Wailuku and was baptized in 1957 at the First Baptist Church in Keokuk, Iowa. Margaret moved to Waynesville, Missouri in 1960 and she transferred her membership to the First Baptist Church of Waynesville where she remained a member until poor health would not permit her to attend. Margaret retired from Civil Service at Fort Leonard Wood in 1986 as a computer specialist after more than 30 years of service. Margaret was a charter member of the Pulaski County Ft. Wood Shrine Club Ladies Auxiliary and past president. Margaret was fondly known as the #1 Shrine Lady. She loved organizing and distributing toys donated at Christmas and being part of the Shriners parades. She was also past president of the Military Order of the Cootie of VFW Post 3168. In 1973, Margaret joined the Order of the Eastern Star Orchid Chapter #1 in Panama and transferred to the Hanson Chapter #22 OES in Waynesville where she was a past Matron. In 2004, Margaret was Grand Representative of Oklahoma in Missouri OES. Margaret and her “sister”, Cheryl Blosser, traveled all over the United States to attend OES functions until her health would not permit her to continue. Margaret enjoyed making peanut brittle for friends at Christmas. She also loved spending time reading and enjoying the fresh air and sunshine at the Lake of the Ozarks and going on pontoon boat rides with the kids and grandkids. Margaret also liked spending time with her mother-in-law, Edna Ripley, they were the best of friends. Margaret cherished the time spent with her mother and only sister, Nancy, they loved to vacation in Las Vegas, California and their beloved Hawaii. Margaret enjoyed traveling overseas with her husband. They have been together on Guam, the Philippines, Germany and Panama. While in Panama, Margaret visited Guatemala, Honduras, Costa Rica, Ecuador, El Salvador, Nicaragua and Colombia. She was a devoted wife, mother, grandmother and great grandmother. Her entire life centered on her family. Margaret’s passing leaves a void with family members and friends. The lives she touched were blessed and enriched. She will be missed all who knew and loved her. Margaret leaves to cherish her memory three sons: Donald Jr. and his wife Sungsook (Chu) of Floresville TX, Dean and his wife Becky Berg of Norman OK, and Martin and his wife Tamara of Waynesville MO; and two daughters, Margaret Anglin of Fayetteville NC, and Robin Nichols and her husband John of Avondale AZ; nine grandchildren and 11 great grandchildren. Margaret is also survived by three brothers: Miyoji Kaya and Masanori Kaya of Hawaii, and Allen Kaya and wife Jane of California, two sisters-in-law, Beverly Kaya of Hawaii and Asako Kaya of California; and one sister, Nancy Chieko Endo, of California; and many cousins, nieces, nephews, and friends. Margaret was preceded in death by her husband of 67 years and best friend, Donald; her parents, Tokuzo and Misao (Kato) Kaya,and three brothers, Minoru Kaya, Sumito Kaya, and Hideo Kaya. Services were held at 1:00 p.m. Thursday, May 25, 2017 in the Memorial Chapels and Crematory of Waynesville / St. Robert with Dr. Dennis Crowder and Pastor Danny Graves officiating. Becky Lercher sang “Serenaded By Angels” and “Amazing Grace”. Serving as escorts were family and friends. Burial followed in the Sunset Memorial Estates Cemetery of Waynesville. Memorial contributions may be made in memory of Margaret Ripley and may be left at the funeral home.

The family of Margaret Sumie (Kaya) Ripley created this Life Tributes page to make it easy to share your memories.

Margaret Sumie (Kaya) Ripley, daughter of the late Tokuzo and...