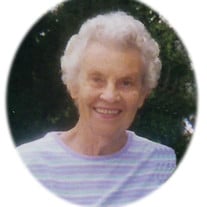 Margurite Leola Jennings, daughter of the late Walter Monroe and Lena Belle (Sanders) Long, was born October 18, 1925 in Waynesville, Missouri where she attended school. On September 25, 1943, Margurite was united in marriage to Clarence D. Jennings in Vienna, Missouri. Soon after Clarence joined the United States Army, he was transferred to Texas and Margurite soon went and joined him there. After being discharged from the military, Margurite and Clarence they decided to move to Michigan to find work. Margurite worked for Cunningham Drugs and then Michigan Bell Telephone. After many years of marriage, Margurite and Clarence were blessed with a son, Dennis Joe. He was the sparkle in her eye and Margurite became a full time mom. Many years later, the family moved to Dundee, Michigan and bought a soybean farm. In 1990, Clarence retired from the railroad and they sold the farm, bought a motorhome and traveled across the country, including Alaska. In 2003, they returned to Richland and built a new home on the original property she was raised on. Margurite enjoyed sewing and made her own clothes for years. She also enjoyed quilting and while living in Michigan, she taught Sunday School for 25 years. Margurite went home to be with her Lord Friday, April 20, 2018 in the Mercy Hospital of Lebanon, Missouri having attained the age of 92 years, 6 months and 2 days. She will be sadly missed, but fondly remembered by all those that knew and loved her. Margurite leaves to cherish her memory, her son: Dennis Jennings and wife Nancy of Richland, MO; two grandchildren: Jennifer and Steven Artress of Lincoln Park, MI; four great grandchildren; two sisters: Irene Anderson of Lebanon, MO and Geraldine Gray and husband George of Springfield, MO; one brother: Charley Long and wife Darlene of Richland, MO; several nieces, nephews, other relatives and friends. In addition to her parents, Margurite was preceded in death by her husband, Clarence Jennings; one brother, Paul Long; and an infant brother, Gary Long. Services were held at 1:00 p.m. Wednesday, April 25, 2018 in the Memorial Chapels and Crematory of Waynesville / St. Robert with Pastor Danny Graves officiating. The song “Amazing Grace” was played and serving as escorts were family and friends. Memorial contributions may be made in memory of Margurite Jennings and may be left at the funeral home.

The family of Margurite Leola Jennings created this Life Tributes page to make it easy to share your memories.